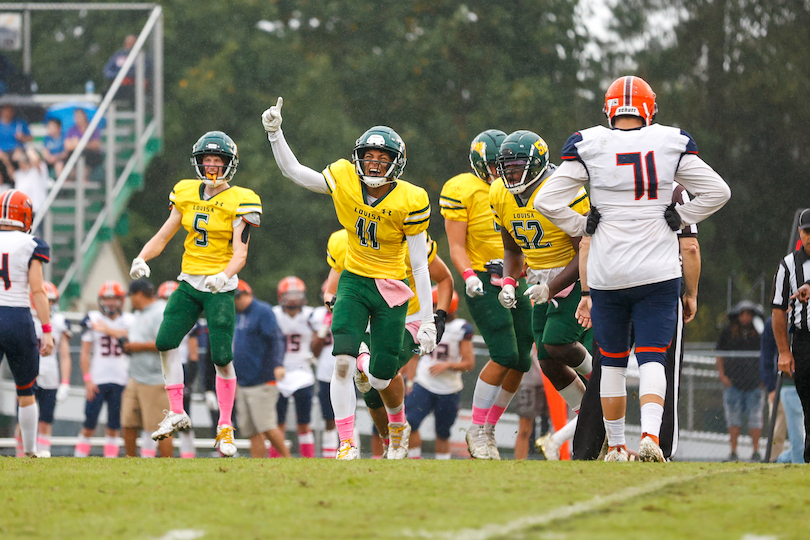 It doesn’t get much better for an offense than finding your 290-pound defensive end Qwenton Spellman 19 yards away in the endzone after he broke off a post and floated back to the corner.

Unless, of course, you also unleash a double pass from Landon Wilson to Chase Miller to Jaylen Beach for a 39-yard touchdown early in the third quarter.

Louisa County’s offense caught fire Saturday evening despite some rain during the first half, rolling up 405 yards including 284 rushing yards. On the other side, the Lions defense did more than enough to make sure that effort stood up in a 44-26 victory over rival Orange County.

Spellman’s touchdown catch got the day started with the highly-touted defensive end breaking off a post route and working back to an open area of the end zone like a seasoned wide receiver.

“He’s an athlete man — broke his route off, ran a little bit of scramble drill and went up and high-pointed the ball,” said Louisa coach Will Patrick. “Not bad for 290.”

That kickstarted a strong first half that led to a 24-6 halftime lead for the Lions helped along by a pair of Jordan Smith touchdowns from 18 and 13 yards out. Smith finished with a team-high 96 yards on 13 touches, showcasing how much he’s expanded his game, finishing off runs and breaking tackles after bursting through the middle of the Orange defense on several runs.

“Jordan Smith is a phenomenal high school player,” Patrick said. “He’s taken it from the athlete he was to the running back he’s become now, I can put him anywhere, that’s the beauty of having a special player like him.”

The Lions’ quarterback Landon Wilson was also doing some damage, hammering away at the Orange defense with 74 yards on 11 carries. Throw in Mills picking up 66 yards on 12 carries, and it’s clear how the Lions’ ground game got it done on a night marked by some serious hitting.

“I thought we moved the ball pretty well — missed a few too,” Patrick said. “We’ve just got to hold and sustain blocks and run the ball hard. It was kind of cool playing in some weather, 2021 they don’t always let you do that anymore, it was kind of an old school slobberknocker, a lot of hitting going on tonight. ”

Beach was one of those players who got in the mix, hauling in the toss from Miller on the double pass and a 5-yard pass from Wilson (who threw for 82 yards on 7-for-13 passing). Wilson found four different receivers on those seven completions and he’s developing some chemistry with Beach.

In the meantime, Orange County found its stride after the half, thanks to a Herculean effort from Paul Poirier, who rushed for 119 yards and two touchdowns and threw for 183 yards and another two touchdowns on 11-for-28 passing.

“I’m so happy of all these guys to come out here tonight and we didn’t quit,” said Orange coach Jesse Lohr. “But Paul, he just gives me everything he’s got and he’s just an awesome young man and competes and works. We had a chance to take him out with five minutes to go and he’s just a senior, he just wants to end it on the field.”

The Hornets traded touchdowns in the third and fourth quarters after the Lions extended their lead on the double pass to 31-6. But every time Orange scored, Louisa answered and the Hornets couldn’t get off the field as Louisa converted seven of 12 third downs and another 2-for-4 on fourth downs. That execution in critical situations was a difference maker.

The Lions now square off with the other team that’s still unbeaten in Jefferson District play, Western Albemarle, while the Hornets will try and rebound against Fluvanna County at home. 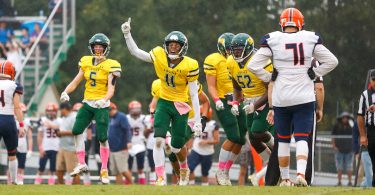 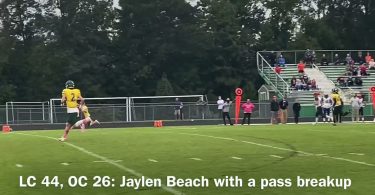