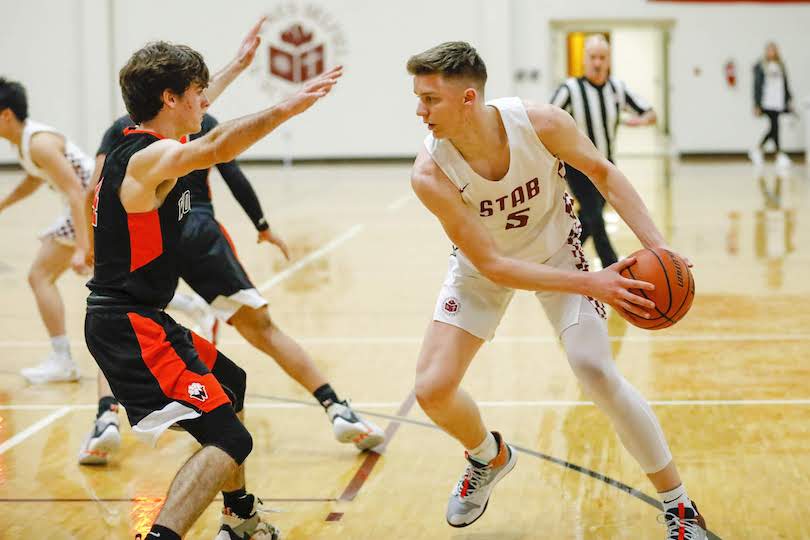 For a team that prefers an up-tempo game like the St. Anne’s Belfield boys’ basketball squad, facing an opponent that slows things down can be frustrating. That is the exact scenario in which the Saints found themselves in on Friday when Woodberry Forest made the trip to the Conway Convocation Center.

The Tigers frustrated STAB with their brand of basketball early on by dominating the time of possession, and forcing the home team to wait patiently before they attempted anything from the field.bBut after a few minutes of watching WFS dictate the pace, the Saints turned up the heat on defense, which in turn, helped them build enough separation on the scoreboard to feel comfortable once more.

St. Anne’s Belfield used a big second quarter run and a balanced scoring attack to eventually run past the Tigers 58-33.

The Saints (8-4) went up by double digits with a fade away jumper by Justin Taylor on the first possession of the second quarter, and the advantage only grew, as they were able to speed the game up. STAB opened the second frame with an 11-2 run, in which four different Saints touched the scoreboard. The big surge staked the home team to a 19-point lead, which forced the Tigers to speed things up and play a style that they had not planned on initially.

“We wanted to play our defense — play in the gaps and make them shoot contested threes,” STAB head coach Damin Altizer said. “The focus was, ‘Let’s not them dictate to us, let’s play our game.’ If they want to play late in the shot clock, lets make them take shots late in the shot clock. I don’t think we had a shot clock violation, but there were several times when they had to rush it there at the end, and that was the goal.”

The score sheet was about as balanced as it gets for the victorious Saints. Nine different STAB players touched the net in the blowout win, as the big lead allowed Altizer to tinker with the lineups throughout the second half.

Senior Malachi Poindexter led the way with 11 points, while freshman Carter Lang finished in double figures as well with 10. Nick Reese added nine points, to lead the vast array of single-digit scorers for the Saints.

“A lot of times this year, we’ve had a couple of guys with 20 and everyone else with five or six, but today to be balanced, I think it shows that we were disciplined, we executed, and we trusted one another,” Altizer said. “The scoring was spread out, which was the goal. They did a great job sharing the ball and trusting.”

The Tigers often marked STAB’s leading scorer, Taylor as soon as he crossed the midcourt line. Despite being undersized compared to their opponents, Woodberry often doubled Taylor and Poindexter whenever they had the ball anywhere on the perimeter.

But similar to the way that STAB handled Woodberry’s offensive game plan, the Saints eventually adjusted, and the Saints’ two leading scorers took on the role of distributors to their vast array of post players in the low block.

“[Poindexter] and [Taylor] are great passers. When Woodberry was double teaming the ball-screens, they did a great job of feeding the bigs,” Altizer said. When they were doubling, somebody was open, and those two did a great job of finding the open man.”

Woodberry notched its first bucket with 3:52 remaining in the first quarter, and had to wait roughly nine more minutes for its next field goal.

The Tigers played their best offensive basketball in the middle stages of the second quarter. Back-to-back three-pointers by junior Noah Adams sparked a 10-2 run, in which WFS trimmed the deficit to just 11 points. Adams was a bright spot for the Tigers, as he led all scorers with a season-high, 11 points.

Woodberry will look to get back on track next Friday night with a road date against Duke-bound forward Henry Coleman and Trinity Episcopal.

The Saints will host Regents on Saturday at 2:30 p.m.. 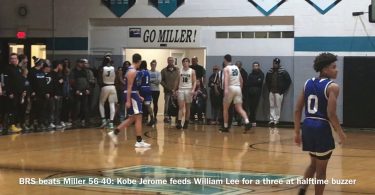 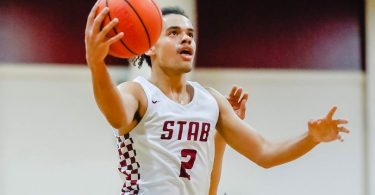