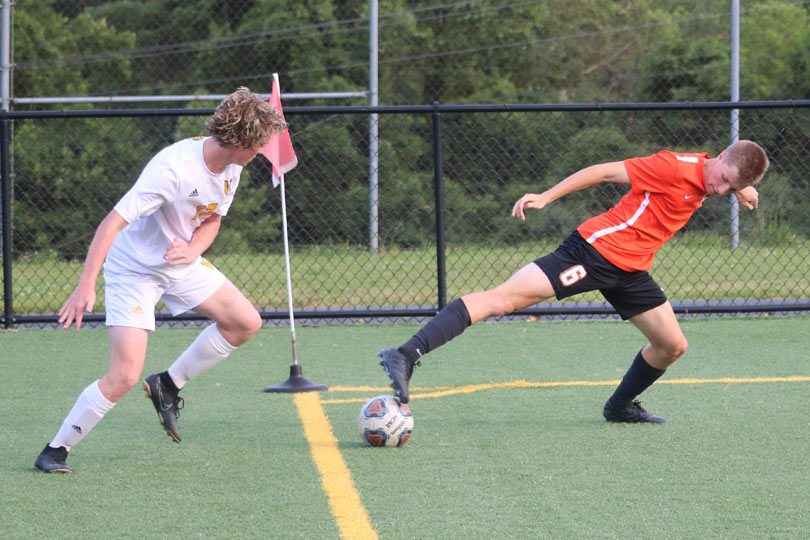 A playoff soccer game is always going to be a struggle for those that are on the field for most of the match.

Once you add in two overtimes, as was the case in Tuesday’s 4A State quarterfinal contest between Charlottesville and Loudoun Valley, it can become a complete war of attrition.

But with tired legs all around, the Black Knights had a secret weapon on the bench, in the form of senior Rachade Kondo.

Inserted into the match soon after the extra periods began, Kondo delivered perhaps the biggest goal of his career.

With the score knotted at two and under two minutes remaining until the game became sudden victory, Kondo turned a beautiful cross from Ayat Mohammed in front of the net into the go-ahead goal.

The shot sent the home sideline into a frenzy, and CHS held on for a thrilling 3-2 win over LVHS.

The two teams had played relatively even soccer for the second half and into the two overtimes, and both the Knights and Vikings knew that it would take a fortuitous bounce or break on the ball to give someone the edge.

That break came in the form of Mohamed’s slick ball movement and a pair of Viking defenders colliding late in the second overtime period.

As he drew attention from the Loudoun Valley defense and goalkeeper, Mohamed slipped the ball to a cutting Kondo, and the battle-tested senior did the rest to keep his team’s season alive.

“I saw my teammate [Kondo] at the far post. I didn’t want to force anything, so I took some more attention to get it right to him, and he scored,” said Mohamed of the assist that led to the go-ahead goal.

Kondo’s big-time shot was the perfect conclusion to the match, especially after the talented reserve passed up on an excellent chance to take the lead several minutes earlier.

In the opening minute of the second overtime, Kondo drove the ball nearly the length of the field, and was seemingly headed towards the goal. Only instead of firing away at the net, Kondo passed the ball back to a streaking teammate, and it would end up being an empty possession.

The opportunity had crossed Kondo’s mind as he attempted the game-winning shot later in the period, but like Mohamed, he wanted to make sure that the moment was right before he made his move.

“[The play at the beginning of the second overtime], I thought about scoring, but I didn’t have the right angle, so I decided to slide it in to someone else,” Kondo said.

With Charlottesville’s stacked roster, Kondo was often called upon when depth was needed or when his team had already built a lead for much of the spring.

But when his team needed a shot of energy and with the season on the line, CHS head coach Martin Braun knew that he could call upon his reliable veteran to jump start a late-game surge.

“We needed [Kondo] to come up big. We were struggling out there a bit,” Braun said. “I told Rachade we needed him to make a spark and he did… great finish off of an amazing play by Ayat. (Kondo) is a great player — on another team he would start, but he’s kind of our super sub.”

Charlottesville struck first late in the first half. Adam Moreland put the Knights ahead off of a corner with 13:00 remaining in the frame, and CHS took the 1-0 lead into the locker room.

The Black Knights possessed the ball for most of the first half, with Loudoun Valley only having one shot on goal in the entire period, but the Vikings were ready for battle in the second frame.

Mason Field knotted the game at one just five minutes into the second half.

Charlottesville responded with a free kick by Kyle Lenhert with 13 minutes later, and the Knights had several opportunities to extend the lead shortly after.

Unfortunately for CHS, the Knights could not cash in on any of those chances, which left the door open for Loudoun Valley.

Six minutes after Lenhert broke the tie, LVHS’ John Dugger knocked in a header to knot the score at 2-2.

Per Virginia High School League rules for overtime, the teams were set to play two five-minute overtime periods, followed by a pair of sudden victory overtimes if necessary. Apparently, the Knights and the capacity student section forgot the setup for a brief moment.

After Kondo scored in the second overtime period, the entire Charlottesville team gathered on the sideline to mob their heroic senior, and the students set out plans to storm the field in celebration.

But as was the case for the entire evening, Charlottesville quickly regained focus, and did what it had to do to put the high-scoring Vikings away.

“These playoff games are super physical,” Braun said. “It’s kind of ‘who wants it more?’ Hats off to [Loudoun Valley], they gave us a great game, and we’re lucky to get off with a victory here.”

Charlottesville will face Jamestown on Friday at 10 a.m. in the state semifinals.

By Ben Sheridan / Scrimmageplaycva.com contributor   If there’s one thing that the...