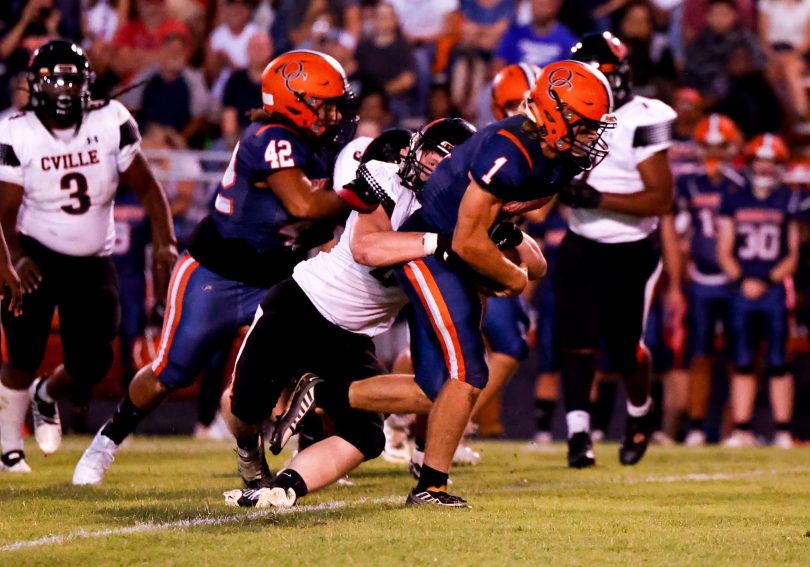 Orange County was looking to keep its hot start to the season going when the Hornets hosted Charlottesville Friday night.

They didn’t just keep them up. The Hornets rolled to keep them up, shutting out the Black Knights 38-0 to move to 3-0 on the young season.

“I’m proud of those guys, Coach Ferguson’s been doing a great job with those guys for years, and just another great gameplan that got these kids going,” said Hornet’s Coach Jesse Lohr.

The Hornets received the opening kickoff, and quickly punted the ball away to the Black Knights. But shortly thereafter, the Hornets’ Brady Foran picked off the pass on Charlottesville’s first play, racing 35 yards the other way to put the Hornets on the board first early with a 7-0 lead.

A few plays later, a fake punt rush by the Black Knights in their own territory led to a turnover on downs, giving the Hornets excellent field position. The Hornet offense was off to a slow start however, and the drive stalled just short of the goal line. Austin Frazier came out to drill the short field goal to give the Hornets a 10-0 lead late in the first.

While the offense got out to a slow start, the Hornet defense surely did not as they came away with two more takeaways in the second quarter off of a fumble recovery and then the second interception of the game for Foran.

Then Jeremiah Wharton found JaePharoah Carpenter in the endzone for a 9 yard score, giving the Hornets a 17-0 lead before the half and getting the offense going. Wharton ended the night going 6-for-14 for 75 yards and two scores.

That score was all the Hornets needed for the offense to wake up, and the next two Hornet drives took a combined six plays, with Christian Simpson capping both of them with rushing touchdowns, giving his team a 31-0 lead in the third.  Simpson ended the night with six carries for 56 yards and the two scores. Bryant Chiles also had a big night rushing for the Hornets, with 11 carries for 133 yards.

“The line had great blocking and we were capitalizing off the blocks and being able to score,” said Simpson.

The next Hornet drive resulted in yet another touchdown, with Wharton finding Dwayne Wells for the 17 yard touchdown pass, making it 38-0 in the third quarter which is where the score would stay.

The Hornets will look to keep this early roll going when they host Harrisonburg next week, while the Black Knights will look to regroup while taking on Spotswood at home.