Woodberry Forest had to rally again.

This time though, instead of 26 points, it was just one.

The Tigers used an explosive third quarter to pull away from Paul VI Friday night, rolling 39-14 after trailing 14-13 after the break. The win came a week after Woodberry rallied from a 33-7 deficit to beat Blair 43-33.

It’s the second week in a row Woodberry has held an opponent scoreless after the break. The defense got it done in the second half, with three turnovers. Nik Gjika and Will Tucker came up with interceptions while Trey Roberson had a critical fumble recovery. Greer Martini led the Tigers with nine tackles, including a pair for a loss. Gjika was in on seven stops.

The Tigers’ passing game was efficient. Quarterback Hunter Etheridge went 8 for 14 for 120 yards and a pair of touchdowns. Etheridge also ran for 82 yards and two more touchdowns on 13 touches. Christian Asher put together a 58-yard effort on the ground. Woodberry spread 245 yards of rushing offense among six different players.

Jacob Rainey, in his second game action since his amputation last year, entered in the fourth quarter and tossed a 20-yard touchdown to Wylie Mendicino. It was the first career touchdown catch for Mendicino, also a Charlottesville-native.

For Paul VI, Owen Costello led the offense with 103 yards on the ground.

Woodberry hosts Charlotte Country Day out of North Carolina Friday afternoon. The game holds some special meaning for a big chunk of the Woodberry population as they hail from North Carolina. 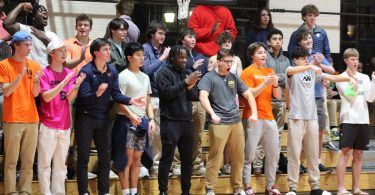