Scoring runs late in close contests has been St. Anne’s-Belfield’s forte all season, and in the first game of a double header against Collegiate that proved no different. Holding a 3-run lead heading into the top of the seventh, the Saints caught fire against the Cougars by brining in five runs to walk away with a 9-1 victory, complimented by a quality showing from starting pitcher David Spinosa and clean relief effort from Matt Morris.

Something carried over into the next game. STAB had battered Collegiate’s pitching rotation after the first game, and took a 3-run lead in the first inning of the next contest. Unearned runs proved somewhat costly in the first three innings allowing Collegiate to make it a game in the bottom of the third. However, there are few cures for a 13-run inning at the high school level and that’s how many runs the Saints piled up in the bottom of the third to fuel a 19-5 win and sweep of the visiting Cougars.

“We hit late in the first game and the bats just got going,” said STAB coach Alan Swanson. “We kept at it in the second game and had an inning where every single player hit the ball very well.”

The monster third inning saw one homerun after another. Back from injury, Kevin White matched a shot hit in game one with a 2-run inside-the-park homerun to kick the inning off.

“That was very cool,” Swanson said. “I couldn’t have stopped him if I wanted to because he was just flying. He plays with enthusiasm and exuberance and it’s fun for us to watch him.”

“Swanson’s always been preaching to keep your hands back and wait for the ball,” Murray said. “It was definitely a long inning. It’s been a long day so it was nice to get it done early.”

Then Brett Johnson struck with an RBI single. In the next at-bat, it was Murray again, this time with a 2-run double. Greg Wise drove in a run on a pop-fly. Having singled and scored previously in the innings, John Siciliano singled again to bring in another run. It was too much for the Cougars.

Josh Gibson added two more runs in the fourth on a double, and Murray was able to wrap up a complete game 5-inning victory via slaughter rule.

“I guess we were feeling it today,” Shifflett said. “Everyone hit and there weren’t many walks. When pitchers throw strikes, players make plays.”

Between the two games, White was 4 for 5 with two homeruns and five RBI. Murray also had five RBI, albeit in one inning of game two. Brian Yeagle was 4 for 4 with three RBI. In game one, Matt Morris went 2 for 2, scored two runs, and recorded the save. 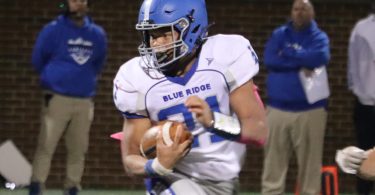