You don’t go from a 4-win team two years ago to an 8-win squad playing three rounds into the playoffs the following year with out finding a winning formula. Spotsylvania came into Monticello and put that on display as the Knights ran for 364 yards en route to a 35-13 win on the road.

“I don’t think there’s anything prettier than a well block running play and for the most part I think we did that tonight,” Jack said. “We tried to focus on that first level block and being satisfied with those 3, 4 and 5 yard runs. You do that and you get first downs and if you keep plugging there you start ripping off longer ones.”

Monticello put together a promising opening drive, getting to the Spotsylvania 25-yard line but a penalty backed them and the Mustangs were unable to convert on 4th down to keep things going.

Spotsylvania responded with a methodical 75-yard clock chewing drive capped with a 1-yard keeper from Ty-Shaun Colbert, the first of three for him on the day. On the Knights next drive, Colbert was able to break off a 56-yard run to the edge and make it 13-0 going into the second quarter.

“My biggest fear tonight was exactly what happened — when you play that type of offense its very hard to stop a 3, 4 or 5 yard run,” said Monticello coach Jeff Lloyd. “They wound up playing defense on us by playing offense. Then we had a ton of kids go out on the offensive and defensive line for us that really messed us up too.”

After a pair of turnovers that proved costly, Monticello got back into the game creating a turnover of their own when Malachi Fields came up with an interception. The junior quarterback then ripped off an 18-yard run where he hurdled over top of defenders to get to the goalline. And on fourth and goal from the 1-inch line, Fields punched it to cut the deficit to 13-7.

However, that would be it for Monticello offensively as injuries stacked up on the offensive line and Spotsylvania was able to continue to crank out first down after first down with its power running attack. The Knights responded with a 29-yard touchdown run from DeAnthony Pendleton with 59 seconds until the break to go up 21-7 after a successful 2-point convert.

“You commit a turnover and the fact is you have to respond to it,” Jack said. “You can let it get you down or you can answer to it. It was a hiccup but we were able to come back and capitalize.”

The Knights put together another lengthy drive at the end of the third with Colbert coming up with a 14-yard run into the endzone. That made it 29-7. The Spotsylvania tacked on one last touchdown in the fourth quarter with another good long drive finished off by Shaun Moore with a 3-yard scoring run with 3:30 to go to take a 28 point lead.

Monticello put together a final scoring drive behind Fields’ legs. He was able to march the Mustangs downfield along with running back Buddy Wilson. Fields scored on a 12-yard touchdown run as time expired to wrap up the scoring at 35-13.

On the night, Colbert led all rushers with 201 yards on 20 touches. The Knights finished with 364 yards on the ground total on 52 attempts.

For Monticello, Fields led the way with 96 rushing yards on 19 attempts.

The Mustangs will travel to Culpeper on Friday. 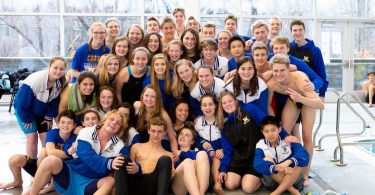 Around this time of year, Western Albemarle’s girls and boys swim teams usually start figuring out...