On Monday night, Monticello volleyball traveled to Fluvanna, looking to avenge their loss to the Flucos earlier this year. After dropping the first set, the Mustangs got it going and rallied to win the next three straight, picking up a big road victory 3-1 while creating some havoc in the race for the automatic Region 3C playoff berth coming out of the Jefferson District.

“I think we reminded ourselves of how we responded after the last time we played them and how we responded in practice, and remembering that gave us the fire to rally back in those sets,” said Mustangs coach Meg Laughlin.

The Flucos came out strong in the first set after trailing the Mustangs 11-9 to start.  After that they got on a roll, taking total control of the first set and winning it 25-17, with big performances from multiple players. Faith Shields finished the night with 28 assists and three service aces, Lindsey Ward notched 25 digs, and Sophia Denby had a team high 13 kills.

After that surge from the Flucos, the Mustangs knew that they had to get things headed in a different direction fast, and Laughlin wanted her squad to speed up.

“She said that we looked a little bit slow at first because we hadn’t played volleyball in a couple days,” said Monticello senior Adaire Burnsed. “But we shook that off and we just thought about what we worked on in practice and put that into the game and used that to our advantage because we’d been working really hard last week to get this win.”

The Mustangs got it together, found that energy and fire, and kept it the rest of the match.  They took the second set by a score of 25-19, and once that set ended, all the energy in the building seemed to be coming from their side.

“It’s crucial, I think the first set we had a case of the Mondays, but we shook those off and played with so much more energy and that allowed us to stay up even when we made mistakes, we just moved forward,” added Burnsed.

And move forward is what the Mustangs did for the next two sets on their way to victory.  Any comeback effort the Flucos could muster was met swiftly and led by some notable Mustang performances. Burnsed led the team with 18 kills, Caroline Devine had 20 assists and Olivia Davis had 10 kills and 12 digs.

After tonight, the Mustangs will get right back to work, heading to Albemarle on Tuesday night for the first of two clashes with the Patriots over the next eight days. The Flucos will take on CHS Tuesday and then get ready for their matchup hosting Western Albemarle on Thursday night. That clash between the Flucos and Warriors should help determine who earns the region playoff spot. With the Mustangs splitting with the Flucos, both squads have beaten Western, though Monticello has already done it twice.

With a solid all-around effort, Western Albemarle pieced together a team score of 330 to... 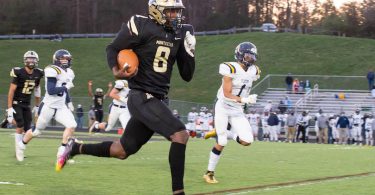 The final time a group of seniors takes the field is always special, but for a senior class...