Aysha Richardson was in the zone to the point where she only needed five outs from her defense. Her 1-hit performance in the circle paired with a Haley Jones RBI sacrifice bunt was the difference for Orange County as it took down James Madison 1-0 in the Group AAA quarterfinals.

“It’s unreal, it’s a dream come true,” said Hornets coach Doris Buzzell. “If we get (Richardson) scoring, I feel comfortable we’re going to get through this game.”

Just as it did all last week in the Northwest Region tournament, Orange got out front early with Richardson leading off the bottom of the first with an infield single.

“Offensively, I get Aysha on and once she’s on she’s going to get to third and we’re score,” Buzzell said. “She will do everything in her power to score.”

Two stolen bases later and Richardson was on the corner at third for Jones to squeeze in.

“It was very important to score first before them, to put pressure on them,” Jones said. “I was pretty excited. If she makes it to third I’m most likely going to drop down a bunt, but I just tried to get it in play.”

With the 1-0 lead, the Hornets vaunted pitcher went to work, put together four perfect innings before issuing a walk in the top of the fifth. It was there that Richardson had to really dial in as the Warhawks put that runner on third with just one out.

“Every time we have two strikes on I go out and say ‘Be tough, be tough,’” Buzzell said. “I tell her to be focused and it’s just something I’ve got superstitious with. Aysha, she’ll throw strikes. She has three balls she can throw strikes, it’s going to come in.”

That situation came up quickly, and twice.  And the result was back-to-back strike outs, on six pitches nonetheless, that got Orange into the sixth unscathed.

“I knew they had the top of the lineup so I had to throw hard and had to throw accurately so (they) didn’t score,” Richardson said.

James Madison broke up the no-hitter in the top of seventh, but couldn’t do anymore damage with Richardson shutting the door on her 17th strikeout of the night. Of the five outs Orange’s defense had to make, only one of them was in the outfield. The only thing that made the performance more impressive was that the Virginia Tech bound pitcher was battling a sinus infection and feeling under the weather. Of course that didn’t stop the momentum this team’s built by winning out since a loss to Albemarle back in April.

“We have good chemistry,” Richardson said of this post season run so far. “Seriously, that’s been the key.”

The Hornets, who won the Group AA tournament in both 1998 and 1999, will head to their first ever Group AAA final four at Westfield High against Great Bridge on Friday at 7 p.m. 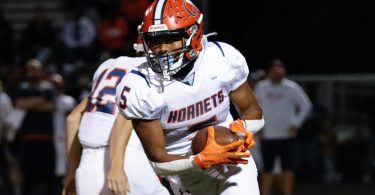 With a potential home playoff game on the line Friday night, Orange County needed a spark from...

It took Orange County a while to finish the job, but the Hornets knocked used a productive run game...