Playing Amherst for the second time this season, Monticello’s volleyball team landed its second win over the Lancers. The Mustangs picked up a 3-1 victory thanks to double-digit kill performances from Brittany Scott and Molly Relken, 25-17, 25-23, 20-25, 25-12.

The two teams battled hard in the first set with neither team creating any early separation. Tied at nine, Monticello was able to jump ahead to a 13-9 lead and keep ahead until 20-16 when it put together a 5-1 lead to jump out to the 1-0 lead.

In game two an early four point lead for Monticello quickly turned the other direction when Amherst put together a 10-1 run to claim a five point advantage. But the Mustangs fought back to tied the game at 14 and both squads went nearly point-for-point until the end with Monticello claiming a 2-0 lead.

Amherst finally got to Monticello in the third contest after both worked back and forth to a knot at eight, but the Lancers going on an 8-0 swing to take a healthy lead. The Mustangs cut the deficit to within two points, but never got any closer and was forced to play a fourth set.

That fourth set was the most lopsided of all but started out contested like the previous three with Monticello holding a 2-point lead at 14-12. From there, the Mustangs peeled of 11 straight points to end the match.

On the night, Relken and Scott led the offense with 13 and 11 respective kills.  The Mustangs had four players with three or more aces with Emily Evans pacing the way with four and Mariah Williams, Tristam Carr and Scott all recording a trio each. Williams had 26 assists on the night. Carr had six digs while Williams registered four.

The Mustangs (8-1) kick off Jefferson District play on Thursday with newcomer Powhatan on the road at 7:30 p.m.

Monticello is searching for an identity right now and the Mustangs came out determined to be... 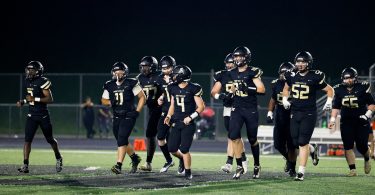