Corey Hunt’s first year at the helm of the Monticello baseball program might just be one the schools most surprising runs in any sport. For the first time in three years, the Jefferson District has a team in the Group AA tournament (Orange County in ’09). Actually it has two, more on that later.

Josh Malm and Kyle Jacobson have been the starting arms that Monticello’s rested on during the last two seasons. Chandler Lee’s preformance in a spot start on Thursday on the road at Loudon Valley cannot be overstated. Thanks to Lee’s strong start and another huge day at the plate from Sam Patterson and Will Decker, Monticello is headed to the Group AA tournament thanks to its 9-5 win over the Vikings in the Region II semifinals on the road.

In an elimination game, Lee put got Monticello through the first four innings without any damage while the offense rolled to a 9-0 start.

The Mustangs got started in the first thanks to a 2-out single from Connor Lilley followed by an RBI double from Patterson. Jacobson then plated Patterson on an error to make it 2-0. Decker led off the second with a double and was brought in after a bunt and groundout from Max Mann.

The third and fourth were big innings offensively for Monticello as it scored six of its nine in that stretch. In the third, Lilley led off on an error, Patterson and Jacobson each singled. Bobby Andris had a sacrifice fly, Decker had an RBI double and Devin Dickerson punched through an RBI single.

Malm started off the fourth with a single and was brought in on a Patterson double. A walk to Andris set the table for Decker who followed through with a 2-run double to make it 9-0.

That was more than enough offense for Lee and the rest of the Mustangs’ pitching staff. Lee earned the win in 4 and 2/3 innings of work. Sean Byrnes and Brandon Beasley closed out the game. Beasely, who earned the win on Monday against Woodgroove in relief, pitched 1 and 1/3 innings of shutout baseball to lock up the victory. The trio of pitchers issued just two walks.

The Mustangs will face a familiar opponent in the Region II title game with home field on the line for the state quarterfinals. Monticello heads to Powhatan and the three previous meetings between the two were all 1-run games with the Indians taking all three on late rallies including the Jefferson District title game.

The 2022 All-Jefferson District field hockey team was selected in conjunction with nominations and... 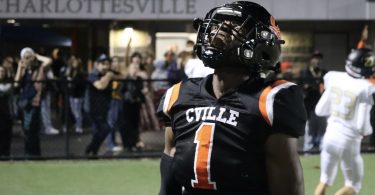 After an 0-7 start, Charlottesville has found some momentum in the later stages of the season and...