Goochland found itself in a shootout Friday night, and this time the Bulldogs didn’t have enough firepower to pull out the win.

Behind an incredible effort from Dajour Smith, Central Lunenburg outgunned the Bulldogs, winning 47-42 to take control of the James River District race.

Smith rushed for 305 yards and two touchdowns on 36 touches and with teammate Tyrek Foster piling up four touchdowns and 65 yards on his 13 touches, it was enough to knock off Goochland at the Bulldogs’ place which is no easy task.

Lunenburg built a 14-3 lead in the first quarter and Goochland struggled to close the gap as the Chargers answered score after score from the Bulldogs. Lunenburg held a 28-14 lead at the break.  Goochland pulled within five when Jordan Jefferson raced 34 yards for a touchdown with little time left in the game, but Lunenburg managed to run out the clock and dash Goochland’s hopes of a rally.

The Bulldogs had a costly third quarter turnover that went for a pick six as Foster sprinted in from 29 yards out. That followed a 7-yard touchdown run by Foster and erased the advantage Goochland gained from their own defensive touchdown early in that frame when Jefferson recovered a fumble and scored from 47 yards out.

Goochland had nearly its full compliment of rushers but the passing game sputtered a little this week, producing just 20 yards and one touchdown from Reid Chenault. Jefferson rushed for 157 yards and a touchdown and David Dyer added another 80 on the ground, but it wasn’t enough to derail the Chargers.

The Bulldogs will try and get back on track during the bye week before playing Nottoway October 18.

Monticello’s Mathes put together a brilliant performance at the Class 3 state track meet at Liberty... 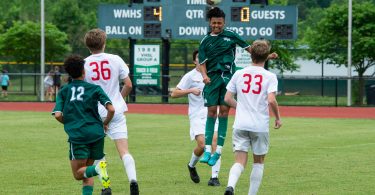 William Monroe boys soccer came storming into the Region 3B tournament off a huge home win against...