For the first two games, it was nothing short of a point-for-point battle with both teams struggling to pull away to achieve any kind of comfort. But in a pivotal third set, Fluvanna County had its best stuff, and while Monticello fought hard in the fourth set, the Flucos wouldn’t let up and finished off the Mustangs to guarantee a bye in the Jefferson District tournament with a 3-1 win, 21-25, 29-27, 25-9, 25-19.

“The girls just got excited and played incredibly well (in the third set) so we took the momentum and were able to keep it,” said Fluvanna coach Christi Harlowe-Garrett said. “It was a tough place to be because the second game ended amuck and then it continued so the girls were just sitting, waiting. But they came out focused and played so well, which was great because it was truly a dog fight up to that point.”

Playing its senior night, the Mustangs came out playing sharp and went up 4-0, and not only maintained its lead, but doubled it to eight points at 21-13. The Flucos clawed back late though to make things interesting by taking seven of the next nine points to make it a 3-point game. But there wasn’t enough wiggle room to complete the comeback and Monticello managed to stay cool and take the 1-0 lead.

“We came out with great intensity tonight and that’s something we’ve been talking a lot about, starting matches right,” said Mustangs coach John Mitchem.

The second set was by far the most interesting, particularly at the end. This time Fluvanna built up an early 4-point margin at 8-4 but Monticello surged back to get within one at 13-12. From there it was back-and-forth until Fluvanna got up 23-20. The Mustangs equalized things 24. The to-and-fro continued to 27. The Flucos then forced an error to get up to game point. It appeared that Monticello had tied the game up again on a Fluvanna miscue, initially ruled in favor for the Mustangs, but after a lengthy conversations, officials ruled that Monticello had illegally substituted, and then after another lengthy chat, ruled for a replay. The Flucos did not squander their next game-point opportunity and tied the match up at 1-1 instead of going down 2-0.

“We were just kind of dead at the beginning of the night and then the intensity picked up,” said Fluvanna senior Hannah Miller. “Once we picked up the momentum we were really able to run with it.

Both teams and their fans were treated to a healthy delay to start the third set. With Mitchem still trying to figure out from a rules standpoint how the last game finished up, officials hit him with a yellow card forcing him to coach exclusively from the bench for the rest of the match.

Fluvanna came out of the break firing away with Miller playing more up front than the previous two sets where she anchored the back line. For the next two games, the Mustangs had no answer for her and she paced the way for a dominant third set where team took a 7-0 lead and never looked back.

With the Flucos up 2-1, things got back to the way they looked in the first two games for the fourth set. Fluvanna again went up 8-4, but five of the next six points went Monticello’s way to make it 9-9. Still tied at 12, Miller truly went off from a kills standpoint to finish off the match. The Flucos took nine of the ensuing 10 points, saw Monticello get to within four points of the lead, but then shut the door for good.

Miller finished just four kills away from the school record for most in a match, finishing at 20. Mandy Kline, a 2010 graduate, set the mark as a senior against Millbrook in the Region II playoffs with 24. Freshman setter Kate Stutz finished with 32 assists.

For the Mustangs, Charlotte Devine, one of the team’s two seniors, led the way with 10 kills and 12 digs. Kaona Ayres had nine kills. Trystam Carr had a team best 17 digs. Setter Allie Perez had 26 assists and led the Mustangs with five aces.

“It’s about momentum now for us though, we’ve got a nice long break since we don’t play on Tuesday,” Mitchem said. “So the girls can rest up for the weekend and come to the gym on Monday ready to work for what’s ahead.”

Fluvanna (17-6, 8-1) finish the year with a huge home game against JD unbeaten Western Albemarle on Tuesday at 7:30 p.m. A win for the Flucos there would force a playoff with the Warriors for the automatic bid awarded to the regular season champion.

“The fight we showed tonight was a great precursor for Tuesday,” Harlowe-Garrett said. “You can’t bring that into practice.”

Monticello (14-8, 5-5) has finished its regular season and will host a game in the first round of the JD tournament against either Louisa County or Charlottesville. 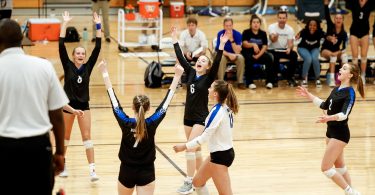