An incredible 17-1 fourth-quarter run got the Fishburne Military School varsity basketball team back into the game, and the Caissons ran past a tired Blue Ridge School Varsity B team in the overtime period en route to posting a 69-63 victory on the road Thursday night.

The Caissons trailed 27-20 at the half and were down 10 points at the end of three quarters and had to turn to small ball after foul trouble put star post players Carson Holder and Tyrone Mason on the bench in the second half. The full-court press that the Caissons employed in their absence worked, giving FMS a six-point lead late before Blue Ridge rallied to send the game to an extra period.

It was all Fishburne in the overtime as the press that had worked to get the Caissons back into the game took the steam out of the late comeback by the hosts.

Sophomore David Oye led FMS with 25 points, making 17 of his 20 free-throw attempts on the game. Chance Berry added 16 points for the Caissons. 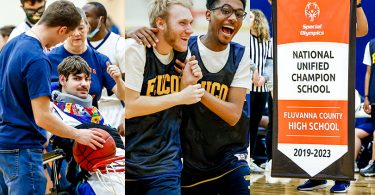