You always want to defend your home field.  And you want to take care of business on homecoming in particular. With a dominant defensive performance Goochland defended its home field Friday night, rolling 35-0 past Amelia.

“The guys did what they normally do and took advantage of every opportunity,” said Goochland coach Alex Fruth.

Goochland started their first drive at their own 46 yard-line and capped it with quarterback CJ Towles punching it in to give his team a 7-0 lead. Then the defense took the field and that was when the Bulldogs really began to roll in the game. Devin McCray ended the Raiders’ first drive quickly with an interception, giving Goochland possession and great starting field position.

Amelia’s defense stood strong and got the ball back but shortly thereafter, had to punt and a 45-yard punt return from Kameron Holman set the Bulldogs up at the Raider 5 yard-line where Quincy Snead carried the ball in to push the lead to 14-0 game in the second quarter.

Later in the quarter, the Bulldogs’ defense struck again, recovering a fumble. The offense couldn’t cash in on the fumble but then McCray made his presence felt, delivering a pick six for his second interception of the game to give his team a 21-0 advantage.

“The defensive line was getting to their offensive line and forced their quarterback into making bad decisions, and we were (firing) on all cylinders tonight,” said McCray.

The defense stayed locked in all night as the following possession resulted in another Bulldog interception, this time by Haiden McCourt, the fourth forced turnover of the half.

Goochland kept things rolling at the beginning of the second half, as Holman returned the first punt he saw 31 yards for the touchdown. That gave the Bulldogs a 28-0 lead over the Raiders.  Then later in the third quarter McCray found the endzone on the offensive side of the football, rushing for 39 yards on a three play Bulldog drive that ended in a 20-yard touchdown, expanding the lead to 35-0.

The defense came up with one more interception, this time from Kindrick Braxton, putting the turnover total to five for the Bulldog defense and leading to a big homecoming victory.

“It was a really big win, we wanted to put on a show for the fans and we played great tonight,” said McCray.

It was a dominant win, but the Bulldogs know that there still is the need to improve throughout the season as they continue another march through the James River District.

“Gotta improve on some things there were some missed opportunities on defense and some struggles offensively but we’ll work on it,” Fruth said. 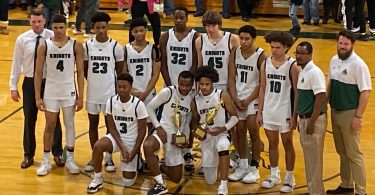