Covenant may not have had its best day against Miller, but with Sean Rutherford on the mound and a young Miller team still trying to find its rhythm in just their second game of the season, what they produced was more than enough to continue a two-season VIC winning streak.

The Eagles rolled 10-2 with Rutherford throwing five strong innings while striking out five and scattering five hits. During that stretch he surrendered just one earned run.

Rutherford gave way to Bryan Pollard who struck out four and surrendered one hit in two innings of work. Pollard struck out the top of Miller’s order in the seventh to close out the victory.

Sam Patterson gave Covenant some breathing room with a two-run homerun in the third inning and Covenant added four more runs in the fourth to make 8-2.

Miller threw a pair of lefties in Justin Cooper and Sam Ridenhour and both pitched well, but a couple of fielding and throwing errors made things snowball. The tandem combined for seven strikeouts.

“The ball just wasn’t bouncing our way today and it was bouncing theirs,” said Miller coach Sam Beale.

The top of Miller’s order struggled as first, second and third batters managed just one hit. By comparison, Covenant’s top three banged out seven hits to set the table for the fourth, fifth and sixth hitters, Clark Crutchfield, Lee Coppock and Chris Shifflett, who had a pair of RBI each. 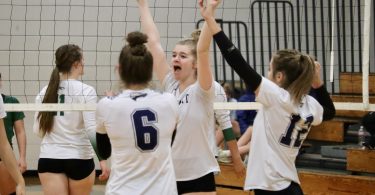 Covenant’s volleyball team arrived last year at least a year ahead of schedule with a young roster...

Last year didn’t go the way Covenant football wanted it to, with the Eagles positing a 1-7...