Fork Union’s Ameer Jackson poured in 24 points on the road against Blue Ridge, but facing a deep Barons bunch, impressively that was nearly enough. Seven different players scored five or more points for Blue Ridge, and behind a slew of forced turnovers, a dominant performance in the rebounding department and outstanding play from Ahmad Fields, Paris Maragkos and Darryl Smith, the Barons cruised to a 72-48 win to set up a big slate of their schedule come Saturday and Tuesday.

“We took some steps in the right direction,” said Blue Ridge coach Bill Ramsey. “In terms of teamwork, getting the ball inside in the half court (offense), trying to get out and run in transition off of long rebounds. In the half court (offense) we really have to take advantage of our size. We’ve been playing really big post graduate teams. From here on out though, I think we’re going to have a size advantage.”

A 13-2 run to start the game put Blue Ridge in control from the get go, but while Fork Union never got closer than seven points — and that was early in the second quarter — the Barons didn’t completely explode until the fourth quarter. And there was no argument from Blue Devils coach Matt Donahue as to how hard it was to match Blue Ridge’s size, as his team struggled to finish underneath with that height looming over.

“They’ve got some big guys,” Donohue said. “It’s not easy to finish there as it might look from the stands. Our focus was to simply play as hard as we could. We’ve had a hard time getting Christmas break out of us and actually coming out and playing hard through a game. I thought that we did that, and really for the first half until about the end of the game we couldn’t get the shots to fall that we normally do. A lot of that was because of their defense, a lot of that was because they have big, athletic guys.”

With Jackson hitting enough shots, whether from beyond the arc or cutting inside for layups, and FUMA kept things from becoming a run away, keeping it a 12-point game early in the third. It did not stay that way as Maragkos came alive in the second half underneath the basket and helped Fields push it to a 20-point lead going into the fourth. A 13-0 run to start the fourth but what little hope the Blue Devils had to rest.

“We were just hustling,” Fields said of the big second half. “We were bigger and thought we could get all the boards, but we still had to box out and stick with the fundamental stuff and we did that.”

Blue Ridge had a slight scare in the second half when Smith banged up his knee cutting behind the basket and hitting a wet spot on the floor. The junior had six points, but without question the game’s most electric play on a fast break dunk in which he impossibly levitated overtop of a FUMA defender for a thunderous dunk.

The Barons filled out the score book with Field leading the way with 17 points and Maragkos finishing with 15. After that Jarod Williams scored seven points, Smith, Daniel Ginsberg and Corbin Jackson all finished with six and Andre Roberts tallied five.

“It’s a lot of fun having that depth,” Fields said. “You can get rest because everybody can play. Everybody can score and rebound. It makes it fun.”

Jackson was a critical element in winning the rebounding game with his nine boards.

For FUMA, Jackson’s 24 points paced the way and he scored 19 of his team’s first 26 points and was responsible for all but one of his team’s field goals in the first half.

“He takes on a big responsibility because he can handle the basketball and score,” Donahue said. “But he’s also very unselfish so the team can handle the number of shots he has to take.”

Blue Ridge has a big slate ahead with Middleburg Academy on Saturday and then archrival Miller on Tuesday. Both of those games are at home for the Barons.

The 2022 All-VISAA golf team is out and a number of local players including several from state... 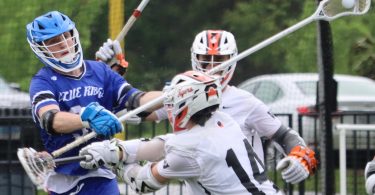 The weather was absolutely awful with rain pouring down, Blue Ridge boys lacrosse was on the road...