Taking a two-pronged approach in the circle with pitchers Emily McCallister and Lindsay Chaney, the Albemarle softball team was able to pick up an important Commonwealth District win as it was able to hold of Colonial Forge 4-3 in a tight contest all the way through.

“Tonight we swung the bats and got a lot of contributions from kids that had not been hitting real well, which is big,” said Patriots coach Bill Hutchinson. “We’re getting better and we’ve got a nice little team here that’s working hard.”

The Eagles got on the board out of the gate with an RBI single from Emily Bradford that brought home Destiny Sharpe, but from there, Albemarle was able to slowly but surely take control.

In the bottom of the first the Patriots tied it up at 1-1 with Kourhi Turner reaching base on a single and then stealing second. That set up McCallister who was able drive Kourhi in on an RBI single. In the second inning Colleen Marshall led off with a single. Tyler Collier then provided a sacrifice bunt. Katie Taylor made it 2-1 for Albemarle with an RBI single with two outs.

In the third Albemarle manufactured a run with Brooke McAllister going up the middle for a single and then stealing second. McCallister then wisely made it to third on a ground out after being initially checked. On a passed ball she broke for home and gave her team 2-run lead to work with.

“That was huge,” Collier said. “We don’t have room for mistakes anyways, but if we make a mistake at least we were still up and didn’t have so much pressure on our shoulders.”

Emily McCallister worked herself out of a jam in the fifth inning after a walk, fielder’s choice and a single put runners on the corners with two outs. But she picked up an inning ending strikeout to wrap up the threat.

The Eagles cut it to 3-2 in the top of the sixth on a single from Taylor Shaffer and an RBI triple from Jessica Perelli to right field.

The Patriots would get a triple of their own though in the bottom half of the sixth to get some much welcome insurance and what wound up being the game winning run. With two outs a single from  Marshall set up the biggest swing of the evening for Albemarle. Collier’s drive to the fence in right-centerfield plated Marshall to put Albemarle up 4-2.

“It was an outside pitch so I had to wait on it,” Collier said. “I worked on my finish and tried to finish straight and then I just had to run as fast as I could.”

Things got a little tense in the top of the seventh with a single from Sharpe for Forge with two outs. Back-to-back singles from Bradford and Shaffer made it a 1-run game with runners on the corners. But in her three innings of relief, Chaney’s change up gave the Eagles fits and she was able to end the game with a strikeout.

“It got a little harry there for a bit, but she buckled down and made some really good pitches there at the end,” Hutchinson said of Chaney’s save. “When you keep the batter off balance, it’s tough to be a good hitter.”

All-CD standout and Albemarle leadoff hitter Caroline Porco also made her return to the lineup for the first time since suffering a head injury. Porco last played against Riverbend on March 28th. She went 1 for 3 before being pulled for precaution in the fifth after almost beating out bunt for single. 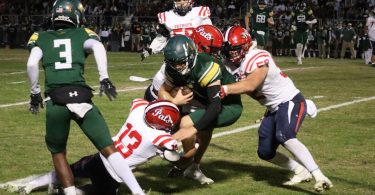