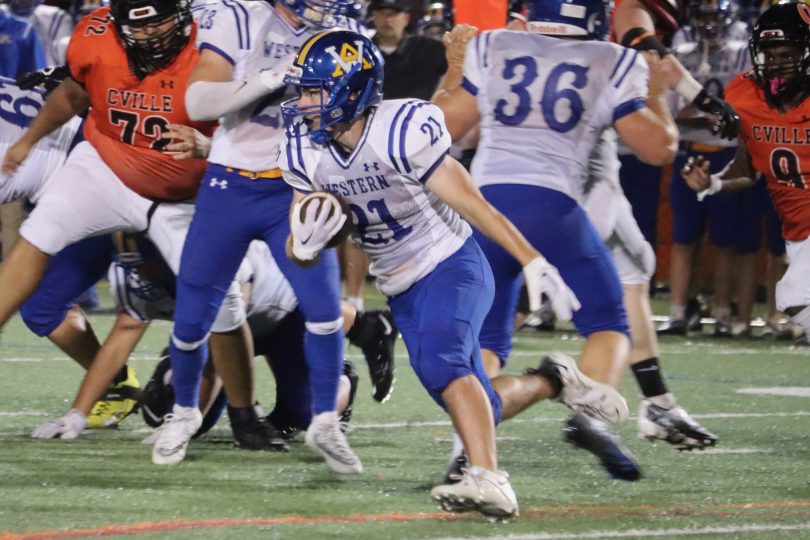 For approximately one minute.

A kickoff and two plays later, Western Albemarle quarterback Nathan Simon hit Jack Intihar for a 71-yard touchdown — Simon’s first of four total touchdowns on the night — and the blitz was on. the Warriors reeled off 42-straight points and overcame a lightning delay to pick up a 42-6 victory over the Black Knights in both squads’ season opener.

Intihar’s catch and run boosted the Warriors to a 7-6 lead and then midway through the first half, with Western facing a fourth and goal from inside the five, the game entered a lightning delay. That forced both squads into the locker room while taking the air out of what was a well-attended, exciting atmosphere up until that point. Western came out from the delay in a power set they call Rhino and scored on a Bubba Shifflett run over the right side to push the lead to 14-6. Shifflett finished with 108 yards on the ground.

“We knew we were going to punch it in — nobody is stopping Rhino, we’re just going to keep punching it in with Rhino,” said Western Albemarle’s Jaden Steppe said. “Bubba is awesome, he knows how to break tackles, he knows how to do everything, he makes the right cuts but a huge part of that is our offensive line, they ground and pound.”

Charlottesville managed to answer that Shifflett score with a methodical drive into the redzone highlighted by a big-time run by Eddison Duolo who rushed for 51 yards on the day. But the drive stalled, forcing a field goal attempt by the Black Knights. Western’s Grant Karczewski burst through the protection and smothered the attempt, giving the Warriors an instant jolt off a field goal block.

The Warriors got rolling in a big way from there with a touchdown toss from Nathan Simon to Steppe from 32 yards out pushing the lead to 21-6 with under two minutes to go in the first half. Steppe had a breakout game, catching a second touchdown later in the game while also playing cornerback for a Western defense that shut down the Black Knights after the early Nowell to Walker score. It’s clear the work he and Simon have put in to build some serious chemistry.

“We worked all offseason, we live really close to each other so I’d pick him up, go to Western, get some tosses in and we prepared,” Steppe said.

Western nearly tacked on another score right before the half, but Charlottesville’s defense made a goal line stand and went to the half down just 21-6. In the second half though, the Black Knights’ offense couldn’t get moving as Western tightened things up. Meanwhile, Simon rushed for a touchdown, extending the ball over the front pylon as he got knocked out of bounds midway through the third quarter. Simon tossed the second touchdown to Steppe and that put things out of reach for Charlottesville.

“(CHS) came out and they’ve had a great camp and they came out with a little more energy but after we got our feet down, hit the pass to Intihar and our defense sort of took over,” said Western coach Ed Redmond. “We started playing better on the perimeter and keeping them inside.”

The Warriors will head to Rockbridge Thursday night for a road clash while the Black Knights will try and bounce back also on the road against James Monroe.