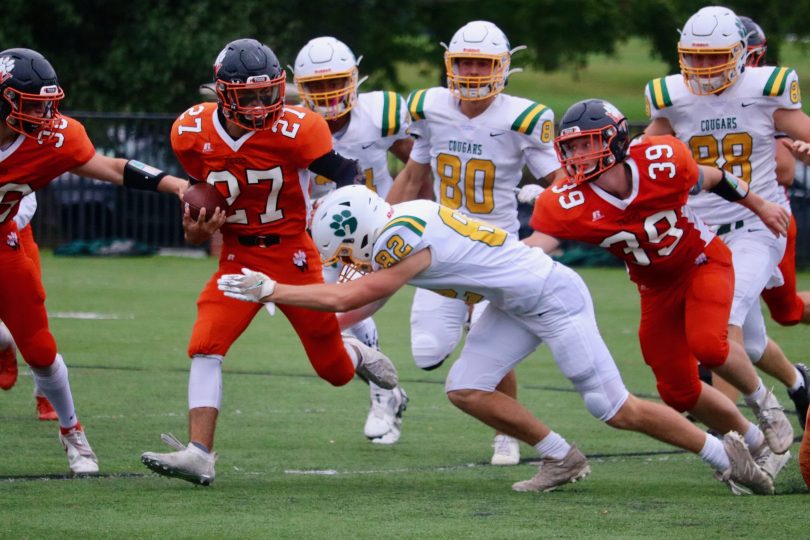 Woodberry Forest’s challenging schedule doesn’t do the Tigers many favors, but Woodberry didn’t let a rough start derail their season — not with Prep League play’s arrival.

With help from Landon Ellis’ return from a broken collarbone, the Tigers beat Collegiate 28-17. It was a critical win for a Woodberry squad that needed one after an 0-3 start.

“We’re just hungry for a win, the whole past two years have been crazy,” said Woodberry’s Donovan Baker who rushed for 129 yards and a touchdown on 21 touches. “We’re just a starving team and we played like it.”

Ellis, the Tigers’ junior wideout, hauled in two first half touchdowns from Harley Shuford, one where Ellis battled his way into the endzone and another a 32-yard rainbow he caught over his shoulder.

“We’ve been practicing those plays all week, Harley threw a great ball on the second one — we’ve got chemistry, we roomed together last year and the other one I just powered my way into the end zone,” Ellis said.

Woodberry started the year with losses to some loaded programs and without the services of star defensive lineman Rodney Lora and Ellis. Lora could return as early as next week. Even without Lora though, the defense took a step forward, holding the Cougars largely in check after an early touchdown drive.

Ellis’ two touchdown catches helped push the Tigers to a 14-10 lead at the break, and they extended that lead to 21-10 when Anthony Lio slipped in for a score. After a touchdown drive by the Cougars that quarterback Owen Fallon capped with an 18-yard touchdown run on a called quarterback draw. Woodberry’s offense stalled on the ensuing drive (despite Jaden Ferguson ripping off a 2-yard run), but that’s when the defense really found its stride. First, Armel Mukam came up with a huge sack on 2nd and 7 to help eventually force a punt with about 7:24 to play.

“They came up big, they’ve been putting in that work,” Ellis said. “The stuff (Mukam) does in practice is just crazy, he’s a grown man, it’s ridiculous. He’s come off an injury too but he’s turned it around.”

After a three and out by the Woodberry offense, Collegiate’s offense sent a snap high over Fallon’s head and Harry Hood pounced on it. That’s  when Baker, who’d been giving the offense a rhythm all game long, took over and physically blasted his way forward for a 12-yard carry and then an 8-yard touchdown and a 28-17 lead.

Right after Baker’s touchdown, Ellis had some words for one of the Tigers’ defensive backs.

Lessane delivered with a leaping pick from his spot at safety, handing Woodberry the opportunity to close out the game. Baker stepped up again with carries of 7, 13 and 7 sandwiched around a Harley Shuford first down run. Those first downs allowed the Tigers to melt the clock and kneel it out for the victory.

“That’s why I work so hard to be dependable – I want my team to be able put the ball in my hands and I can secure a win or do whatever I need to do,” Baker said.

The Tigers are in the thick of Prep League play now, with a clash on the road against St. Christopher’s Saturday at 2 p.m.

Fluvanna football came into this matchup against Monticello looking for their first District... 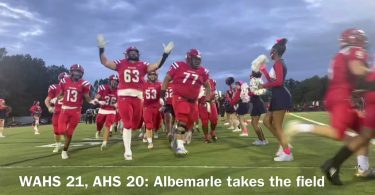