After the first five minutes of the game, it appeared that the cross-town girls’ soccer rivalry matchup between Covenant and St. Anne’s-Belfield would be a shootout. St. Anne’s Belfield had two corner opportunities and Covenant scored a goal after just four minutes to give the Eagles the early 1-0 advantage.

However, the rest of the game turned into a defensive standoff, with neither team scoring until Covenant netted another goal late in the second half, and the Eagles went on to a 2-0 shutout victory at St. Anne’s-Belfield on Thursday afternoon.

Covenant senior Isabella Conklin, who spent the majority of the game blitzing the St. Anne’s-Belfield goal with several shots, made a run on the left side and got the ball into the middle where Makayla Hargrove struck it with her left foot into the back right corner of the net to give Covenant the lead.

St. Anne’s-Belfield had several chances to score an equalizer, including a shot by Chloe Paget-Brown that was saved just before halftime, but the Covenant defense put together a strong performance. Covenant’s goalkeeper, Tegan Murrie, had several saves to hold the Saints scoreless.

Conklin stayed aggressive the entire game, making several runs up the right side and generating several shots for herself and her teammates.

“This game is so important to me,” Conklin said. I’ve played it since I was four.”

With just under fourteen minutes left in the game, the Eagles got an insurance goal when Conklin finally broke through and scored off of a pass from Freshman Sinclaire Hart.

“It felt amazing,” said Conklin after the win.

Win the win, the Eagles improve to 4-1 and prepare to host Highland next Thursday. St. Anne’s-Belfield will host Trinity Episcopal on Tuesday. 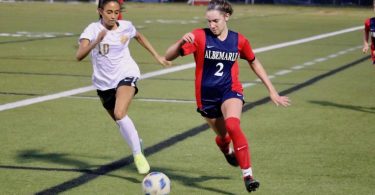