Four days after their grueling, back and forth-battle with Class 5 power and cross-town rival Albemarle, the Charlottesville boys rebounded from their home loss with a big win over a solid Broadway team.

The Black Knights battled back and forth all night with the Patriots on Friday night and led after three quarters, but ultimately fell 73-61 after a huge fourth quarter surge by Albemarle.

It was a quick turnaround for Mitch Minor’s squad, hosting a non-district team that had dealt the Black Knights a 60-52 loss in their first game of the season.

Charlottesville leaned on their trio of Aidan Yates, Keyshawn Hill, and Luka Matic once again to propel them to a 72-44 wallop of the Gobblers. The Black Knight defense held Broadway to 17 first half points and exploded for a 29-point fourth quarter to hand the Gobblers their biggest loss of the season.

By the time the Broadway offense finally got into a rhythm, Charlottesville had created too much separation as they pulled away late to secure the huge non-distict victory over a fellow Region 3C opponent. A rubber match between the two in the playoffs down the line could prove to be a possibility in an extremely tough region that includes undefeated Spotswood.

Matic led the charge with 21 points and seven rebounds. Yates chipped in 18 points and hauled in nine boards to go along with a couple of assists. Hill stuffed the stat sheet with 16 points, five rebounds, three assists, and two blocks. Add the strong play of Charlottesville’s three-headed snake to the emergence of freshman point guard Jacoby Lynch, the leadership of senior Angus Munro, and a plethora of young role players, and Charlottesville (4-2) is beginning to find its rhythm heading into the annual Daily Progress Tournament. The Black Knights will open play against Class 5 Riverside from Loudoun County at Albemarle High School on December 28th.

Broadway (5-3) has a quick turnaround when they host Staunton on Thursday night in a big showdown over the mountain between two of the hotter teams in their area to start the season. 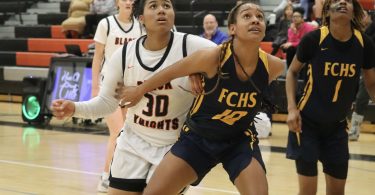