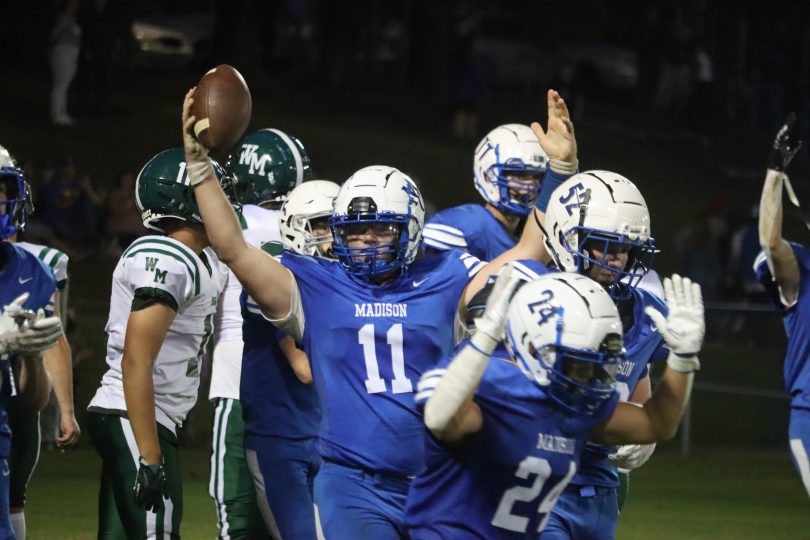 As Madison County has started to turn its fortunes around over the last two seasons, the Mountaineers have leaned heavily on quarterback Wade Fox to get it done.

Friday night, Madison got what it needed from Fox as usual. But its defense — with four forced turnovers including two interceptions in the second half — made sure that Fox didn’t have to do all the heavy lifting.

“This is really special — when I started as a freshman we had six people here the first day Coach Helmick was here,” said Madison’s Jaden Scruggs. “Now we’re going on a run.”

The Mountaineers’ defense held the Monroe offense scoreless in a 23-7 victory in one of the area’s most intense rivalries. Fox scored all three touchdowns on the ground for Madison in the win. It was a huge step forward for Madison’s program as well.

“We have 50 plus guys dressing out every game, the fans are back,” Fox said. “It’s good to see the community come back and realize we’re a team that can really make an impact in the Bull Run District.”

Madison’s defense has gotten a big boost from a young group — only two of the Mountaineers’ starters are seniors — including Scruggs and sophomore Rashad Fortune. The pressure that group applied helped lead to two forced fumbles, one of which led to Fox’s most impressive run of the night, a 46-yard keeper over the left side that put Madison up 20-7 early in the third quarter.

“We kept pushing, kept punching them in the mouth, kept firing off the ball and kept doing what we do best,” Scruggs said. “We just never quit.”

The Mountaineers’ front seven was unfazed by William Monroe’s ability to switch from spread to Wing-T and throw different looks at Madison. They stayed home when they had to and wreaked havoc when they needed to as well in an impressive performance.

“I’m just proud of them, they worked really hard, they deserve it and I’m happy for them,” said coach Larry Helmick.

The defensive backs stepped up in a big way too with Cameron Myers and William Dickey making a couple of bigtime picks in the second half to help close out the win. Fox kept hammering away too on offense and helped the Mountaineers overcome any distractions that could’ve derailed Madison in front of a raucous home crowd.

“My favorite thing about Wade Fox is he’s a phenomenal leader,” Helmick said. “The kids rally around him and I’m just so proud of him.”

William Monroe’s defense did its best to keep the Dragons in it with two huge goalline stands in the second quarter to keep Madison out of the endzone, but the turnovers and penalties on offense were too much to overcome for the Dragons. Jackson Wood had a kick return for a touchdown in the first quarter to even the score at 7-7 after Fox scored his first of those three touchdowns on a goalline plunge. Monroe has had a roller coaster of a start to the year with a huge win over Broadway last week and a frustrating performance against their archrivals Friday.

While they had to gut it out at times, it was an impressive, cathartic win for Madison, their second straight in the Battle for the Blue Ridge.

“It’s bigger than a game when it’s Greene — last year we had some stuff happen so to come out, playing clean, being respectful and having sportsmanship — we showed we can do whatever we want when we executed,” Fox said.

Madison will host Page County next week while the Dragons will try and bounce back on the road against Warren County.