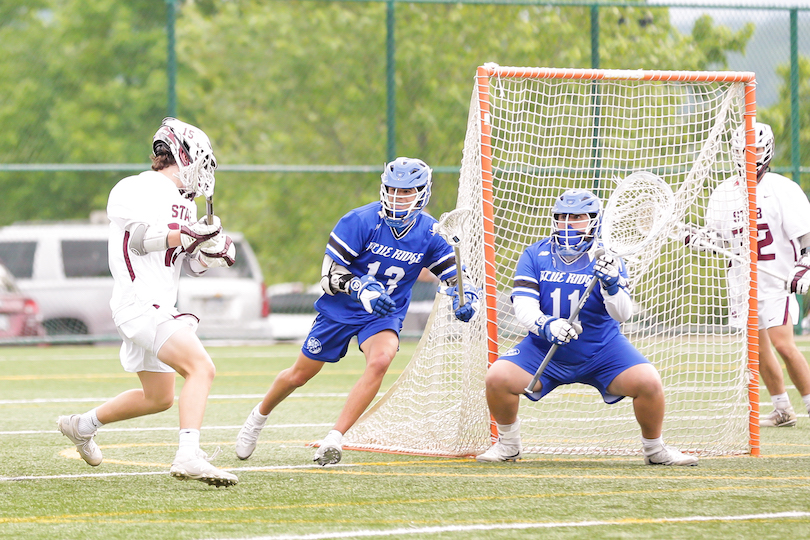 Behind a stellar performance from Blue Ridge goalie Adam Bland, however, the Barons shut down St. Anne’s-Belfield on their home turf for the rest of the game in an impressive 8-2 victory on Monday afternoon with senior keeper Adam Bland holding the Saints scoreless for the entire second half while allowing just two goals in the game.

St. Anne’s-Belfield’s Jake Connelly scored on an inside roll dodge just over two minutes into the game to give the Saints the early lead. Unfortunately for St. Anne’s-Belfield, Blue Ridge responded with a 5-0 run and stifled the Saints’ offense for the majority of the remainder of the game.

Lucas Shoebridge found Jack Charboneau for a transition goal less than a minute after Connelly’s goal to tie the game at one. Kolbe Haug gave the Barons the lead for good on a dodge from behind the cage a couple minutes later. Spencer Amacher scored on an outside shot and then Jack Charboneau scored his second goal of the quarter to extend the Saints’ lead to three. Amacher found Phoenix Pullen for the outside shot with just under two minutes left in the first quarter to make it 5-1.

The second quarter was a defensive standoff, with both goalies making several saves. Jago Gould stood tall in the goal to keep the Saints in it, but St. Anne’s-Belfield could only manage one goal in the second quarter on an outside shot from Tim Myers that hit the pipe before going in. Blue Ridge’s defense forced several turnovers and Bland made several saves to maintain the advantage.

“He’s been our most valuable player,” said Blue Ridge head coach Dom Starsia of Adam Bland. “He might be the best goalie I’ve seen in some time. He is just spectacular.”

That is high praise from the former UVA men’s lacrosse and Hall of Fame head coach. But Bland certainly earned the respect on the field with his performance.

“Adam was so steady in the goal,” Spencer Amacher said. “He saves everything, that guy. He really is the key to our defense this year.”

The strong performance from Bland and the Blue Ridge defense was critical, as the Barons did not deliver as many goals on the offensive end as they would prefer.

“That’s the first thing I said to the guys in the huddle — we should’ve had 18 today,” said Starsia. “The ball is not jumping in the goal for us, period. We just have to be more efficient offensively.”

The Barons went over 17 minutes of game time without a goal, a drought spanning from the end of the first quarter through a few minutes into the second half.

“We had a lot of shots today that we just didn’t finish,” Amacher said.

Luckily for Blue Ridge, Bland continued to make save after save to keep the Saints at bay. The Saints’ offense is also continuing to search for answers after injuries to Tim Myers, Nick Musi and Pierre Reeves have stacked up in recent weeks.

Fort Carden scored back to back goals in the third quarter, and Charboneau found Phoenix Pullen for another goal to extend the Blue Ridge lead to 8-2.

Jack Charboneau led the Barons with two goals and an assist, while Carden and Pullen each tallied two goals. 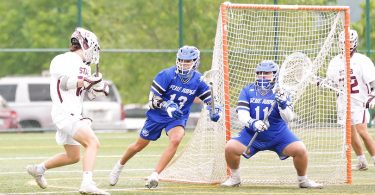 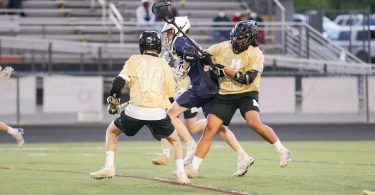