Western Albemarle senior Maya Kelly saved her best performance for one of the biggest moments of her career in the semifinals of the regional girls’ tennis tournament.

Kelly, who started in the top six for the Warriors for the first time, won her match, 6-4, 6-0, and helped Western to a 6-0 sweep over visiting Broadway to advance to the regional finals.

“I was so happy for her,” said Western Albemarle head coach Ellen Markowitz of Kelly’s performance. “That was literally the best match I’ve ever seen her play.”

Maya Kelly’s first set against Broadway’s Maya Bacon was very tightly contested, with Kelly getting a crucial break and holding serve to take the opening set.

“She just got fired up after pulling out the first set,” Markowitz said. “She dug deep at 5-4 and pulled it out. And then she just found another gear.”

That next gear powered Kelly to a dominant 6-0 second set to clinch the match.

“That was the best I’ve felt after a match,” Kelly said.

Another Western junior, Allison Selverstone, won a hard-fought match at the No. 3 spot over Broadway’s Chloe Hasler. Selverstone took the first set, 6-1, and grinded out a tough 6-3 duel in the second set to clinch the final match of the day and finish the sweep for the Warriors.

“Everybody’s got different tools and weapons and to the extent that they can use them at the right times, they’re doing that very well,” said Markowitz. “The goal is to be playing our best tennis when it matters most.”

Western is certainly playing very good tennis when it matters most. The Warriors will look to elevate their game once more in the regional final against Spotswood on Thursday.

After both teams exploded offensively in the opening inning, Albemarle and Western... 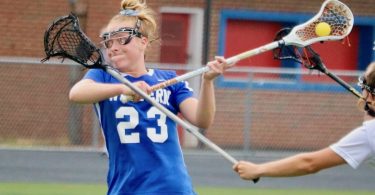 It took a few minutes for Western Albemarle girls lacrosse’s Mattie Shearer to get going...