Minutes away from being forced to decide who’d play in the state championship match via penalty kicks, Western needed something to break their way.

They got it when Daniel Sanchez took a shot from point blank range, from the right side. The shot was stopped but ricocheted right back to Sanchez who deftly laid it off to his left where a waiting Alex Keeton swung his right foot and finished easily. The goal lifted the Warriors to a 2-1 victory over Smithfield and back into the state title match for the first time since they won the title in 2019.

“Daniel was playing on the right wing and fighting for the ball and I was able to find space while he crossed it and put it in,” Keeton said. “All my teammates have been playing me great balls in and I’m just doing the easy part finishing. Credit to them.”

Keeton scored his third goal of the state tournament late in the fourth overtime after Western struggled to find the go-ahead goal from the moment Smithfield equalized with 33 minutes to play in the second half. Keeton scoring off the assist from Sanchez, just a freshman, showed just how much the Warriors have learned to lean on one another during this season.

“When you’re playing that long, you can’t do it all by yourself,” said Western’s Sam Vigilante. “You’ve got to trust the team and we have a really tight knit group of guys here, so there was no problem passing the load and it worked out amazing today.”

Vigilante is one of the reasons why they can lean on each other that way in that critical moment. His concussion in the region final’s first portion (the game was split over two days due to a rain delay) forced the Warriors to figure out how to play without their Princeton-bound senior leader. That meant other people had to step up and adapt to his absence.

“The boys gave me life and I feel amazing just to be back out here, I didn’t want my season to end at Jefferson Forest,” Vigilante said. “I’m really glad we could come out and get the job done today.”

He made his presence felt in the first half, scoring off a header off a free kick from fellow senior Will Graham from about 40 yards out with 9:50 left in the first half. Vigilante cut toward the goal and Graham’s perfectly placed blast found Vigilante’s head.

“If you watched some of the last game, we really missed him, not in terms of effort or desire, we have that in spades, but in terms of his presence, his calm, his organization and his ability to control the game,” Oakland said.

The Warriors also had to contend with and try to solve the Packers’ lightning fast attacker Onesime Muepu, who assisted on the equalizer early in the second half when he found Evan Fontana for the goal.

“It took us awhile to figure out how to deal with him, his athleticism and speed was unlike anything we’ve seen this season,” Oakland said.

The defense held up though after that single goal and keeper Cullen Webster only had to make three saves on the day despite playing nearly 20 extra minutes of soccer. That opened the door for Keeton’s go-ahead finish in the closing seconds of the fourth overtime. Keeton scored twice in the state quarterfinals and once in the region title match and his emergence has been a big reason for the Warriors’ postseason success.

“He’s very athletic – just incredible balance and explosion – and he’s developed a nose for the goal,” Oakland said. “He’s able to keep fighting with one minute left when everyone else maybe has lost a step. He never really needs to come out.

I think it’s so hard to come up with any tactical or technical explanation of anything that happens especially in a state semifinal. It’s really a swing in momentum, confidence and maturity. To me, it looked pretty chaotic.”

Western thrived in that chaos and now they’ll get a chance to play for the program’s fifth-ever state title Saturday at 10 a.m. back at Chancellor High. 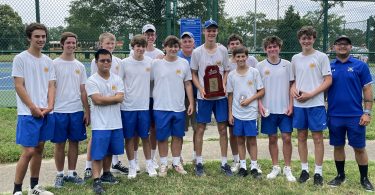 Dominant over the years and dominant in the last six days.   Western Albemarle’s boys tennis... 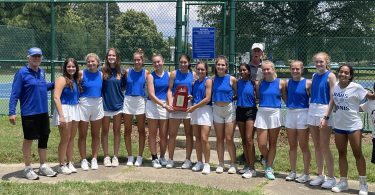