St. Anne’s-Belfield is definitely young and inexperienced, but one thing is certain after Friday night.

The Saints know how to bounce back.

After absorbing a blowout loss in the Saints’ home opener against a seasoned Fork Union squad, the young Saints levied their own blow out, beating Hargrave 63-12 Friday night at home.

STAB’s defense led the way, forcing five turnovers and holding Hargrave to just 93 yards of total offense. Austin Williford broke out in a big way on that side of the ball with two defensive touchdowns, a pick six in the early going and a scoop and score late in the third quarter. In between? Williford hauled in two touchdowns from Nolan Bruton, one from 35 yards out and one from 12 yards out.

The Saints’ defense also had a pair of first half safeties, with Gabe Pullen registering the first and Pharoah Harris stuffing Hargrave for the second. Chance Mallory’s five solo tackles led the defense in that category, with three of those five doubling as tackles for a loss. The Saints had nine tackles for a loss as a team.

Bruton had a monster night on offense, accounting for four touchdowns passes and 151 yards through the air on just 7-for-17 passing. He also rushed for 69 yards on five carries. He also hit a field goal.

For a night, Braden White was Bruton’s favorite target as he caught four balls for 85 yards including two touchdowns from 31 and 19 yards out. Harris added a touchdown run to open the scoring before he came up with the safety later in the half. 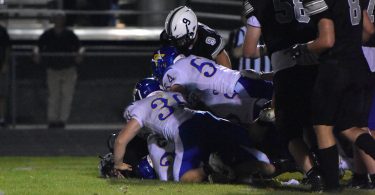 After a tough game against King George last week, the Louisa football team was looking to...