Orange County football came to Fluvanna Friday night looking to get back on the right path against the Flucos after last week’s loss to Louisa.

With a huge second half, the Hornets got back on track in a big way, rolling past the Flucos 42-7 despite stalling for a bit in the opening half.

“We lost a little bit of momentum in the first half, no excuses they made some good plays,” said Orange head coach Jesse Lohr.

The Flucos started off with the ball, but a fumbled snap later and the Hornets found themselves driving early.  That first drive paid off in a big way as Jeremiah Wharton found Elijah Coleman on a 34-yard pass, and Bubba Wells adding on two points to make it 8-0 Hornets early.

A Fluco three-and-out led to the Hornet offense being sent right back out to the field.  And they made the Flucos pay quickly, as they stormed down the field before Bryant Chiles punched it in to make it 14-0.  Chiles would end the night with nine carries for 56 yards and a touchdown.

“Once we get on attack we were just driving them backwards and we have all 11 heads to the football just like every game,” said Chiles.

But then the Hornet offense began to stall, and the Flucos took advantage.  They forced a turnover on downs for the Hornets, and came up with their first succesful drive of the game capped off by an Isaac Lewis 15-yard touchdown to trim the deficit to 14-7. Lewis would end the night with nine carries for 60 yards and a score.

The Hornets’  struggles continued, as the next two drives resulted in two interceptions for Lewis before the half.

Coming out of the half, the Hornets knew they needed a big play.  They got one from a big kickoff return into Fluco territory.  Shortly after, Wharton found Coleman in the endzone once again, making it a 22-7 lead with the two point try for Chiles. Wharton ended the night going 11 of 18 for 143 yards, two touchdowns and two interceptions, while Coleman had four catches for 62 yards and two scores.

The Hornet defense then came up with a massive play, in the form of a Naziere McIntosh pick six, and another Chiles two point conversion gave Orange a 30-7 advantage over the Flucos.

The Hornets didn’t stop there in the third quarter either, as Wells put up two touchdowns within a minute and a half to put his team up 42-7.  Their defense never let up, and that would be where the score would stay at the end of the game.

The Hornets don’t have long to celebrate this win, as they will play Albemarle in a rescheduled game Tuesday, while the Flucos will look to regroup and travel to Western Albemarle Friday. 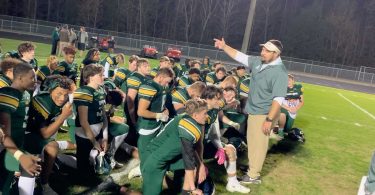