In the quarterfinals of the VIC Baseball Tournament, No. 3-seeded Covenant had to battle back to survive and advance past Blue Ridge.

The Eagles got over the hump, winning 5-4 over Blue Ridge to secure a spot in the VIC semifinals Thursday where they’ll face Carlisle on the road.

After a tough ending to the season last year, Covenant was looking to have a bounce back post season, and it started with getting their first win in the tournament. Blue Ridge was the squad that got it going early though

Covenant gave up a run in each of the first three innings, and their offense had a couple of base hits, but wasn’t productive enough string hits together to score runs. Covenant fell behind fast 3-0 after 3 quick innings with Jay Kim scoring the first run for the Barons, Sebastian Bosquez singling in Miguel Robiou for the second and Ryan Neumann homering to left field to make it 3-0.

“I just thought that our attitude wasn’t there in the first three innings,” said Covenant sophomore catcher Mark Wamhoff. “After some big hits by some big-time players at the top of the lineup, we really created some energy, we started getting a rally together, and everything fell into place.”

After holding Blue Ridge to one run in the fourth inning, Covenant proceeded to post four runs in the bottom of the inning, tying the game at 4-4. It started with an RBI double to left by Mark Wamhoff, then two runs scored on passed balls and then Jacob Rexrode scored on an error to put the Eagles up. Blue Ridge responded by evening the game at 4-4 in the top of the fourth on a Takahiro Ochi single where Logan Rhoades scored on the throw.

In the bottom of the fifth, Covenant’s Ryan Steeper scored on a groundout after reaching on a double to put Covenant up Blue Ridge 5-4, and Blue Ridge couldn’t find an answer.

Although this game was tight Wamhoff is confident about his team’s capabilities and the momentum this game gives his team moving forward deeper into the postseason.

“We were on a five game winning streak earlier this season, and just building that momentum. We didn’t win much last year, so this is huge for us to make it to the VIC semifinals. We’re just ready to go to the championship and win it.”

Covenant’s Jonathan Newton went 3-for-3 on the day and Steeper went 2-for-3. Stepper also closed out the game on the mound, striking out two in the seventh while only needing nine pitches to get it done. Rexrode struck out 10 for the Eagles in six innings of work, and Blue Ridge scratched out just three earned runs against the Covenant starter.

With the loss, Blue Ridge’s season comes to an end, with Ochi and Neumann both going 2-for-4 while Rhoades and Bosquez went 2-for-3. Stuart Bladich threw four innings and allowed just a couple of earned runs. The fight the Barons showed against the Eagles was a good sign for the future and a sign of leadership among a crop of seniors that’s been critical as Talley continues to work to rebuild the program. 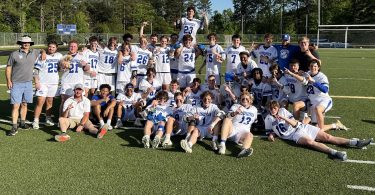 Blue Ridge’s boys lacrosse team has been on the wrong end of some tough battles this year, with... 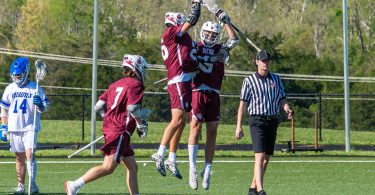