After coming off of a tough four-set win against Monticello 24 hours earlier, the Albemarle volleyball team knew that replicating that result at Fluvanna would be no easy task.

“Away wins against tough opponents in the District are always a blessing, and that’s only the second time we’ve gone four sets with somebody and I was concerned about how our team would handle the extra pressure but they handled it beautifully,” said Albemarle coach Lance Rogers.

The Patriots did handle the pressure. After losing the third set, they found a way to come back from behind late in the fourth and take the match.

The first set was what set the tone for the entire match, which turned out to be highly competitive. The Patriots however were able to hold off an energized rally from the Flucos, taking the set 25-22. Setter CC Smith for the Patriots provided a big lift in the set on her way to recording 40 assists on the night.

In the second set it was all Patriots. They seemed to have all the momentum, cruising to a 25-13 win to take a 2-0 lead. Key performers for the Patriots included Grace Sembrowich with 28 digs on the night, and Weining Ding who ended with 16 kills.

The Flucos were not done yet however.  They found a way to regain their energy, and fight their way back into things. They wound up taking the third set 22-25, getting big performances from multiple players. Sophia Denby had 16 kills, Khania Brassfield had 11 kills, Jillian Davis had 24 digs, and Faith Shields had 43 assists on the night.

“We were talking about how they just used their momentum and energy to carry them through that set,” said Maya Winterhoff, who led the Patriots with 23 kills. “So we just focused on using our momentum and energy and not really focusing on the skill but more on non-skill factors like our energy.”

The Patriots did get their energy up in the fourth set in a big way.  They fought their way back from being down 15-19, to win the set 25-20 and take the match for a big District road win. 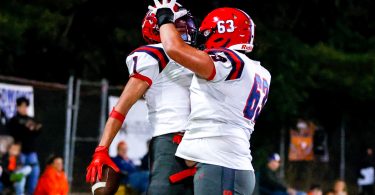 This week we talk about the Western/Albemarle and Orange/Louisa rivalry clashes this week... 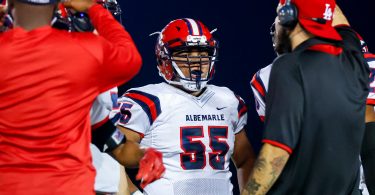