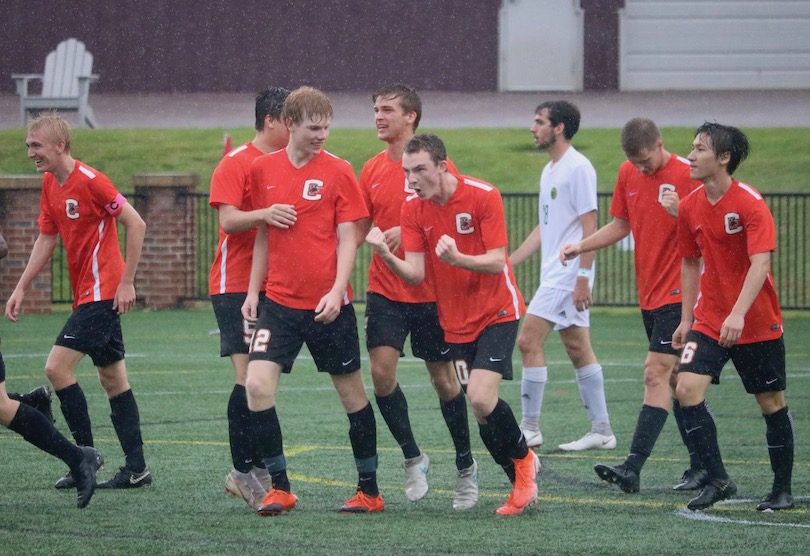 Critical goals from reserve players are starting to become the throughline in this postseason for Charlottesville’s boys soccer team. Earlier this week against Loudoun Valley in the state quarterfinals it was Rachade Kondo. Aidan Folger took on the role this time around — with an assist from Kondo.

A goal from Folger helped lift Charlottesville to a 4-2 victory over previously unbeaten Jamestown, putting the Black Knights back in the state title match Saturday.

“This is a great group of guys, they deserve this,” said Charlottesville coach Martin Braun.

Folger struck on a thrilling run jumpstarted by Malcolm Brickhouse with a blast into the box. With Jamestown’s keeper racing to the ball, Kondon connected with a leaping toe flick over the keeper and Folger headed the ball into an open goal.

“I had an opportunity earlier in the game and I flubbed that one,” Folger said. “I almost went for the ball myself but saw Rachade going for it and knew I had to get in the box. It worked out, I could just poke it in.”

Timely goals by reserves aren’t some happy accident. It’s part of the design for the Black Knights, who’s deep bench allows them to wear down teams with less depth and constantly bring in fresh players for short spurts that can change the game.

“I try to make opportunities every time I go in because I don’t go in for long periods of time,” Folger said. “I just go in and try and get it done. We’re sort of secret weapons and I think Martin likes to keep it that way. We don’t have 60 minutes in us, we have 10 or 20 and if we’re able to do what needs to happen in that 10 or 20 minutes it’s better.”

To do that, of course, you’ve got to have the depth in place first and Charlottesville has it.

“It’s lucky that we have guys who can come off the bench who are such high quality and can give us great minutes,” Braun said. “I think both (Kondo and Folger) played great today.”

Folger’s goal put Charlottesville up 2-1 and the Black Knights never relinquished the lead, tacking on another goal from Ayat Mohamed on a header off a Benhui Ryang cross before the half. Mohamed continued his relentless work as a forward, battling through another physical clash with a variety of defenders on runs. He also setup the Black Knights’ fourth goal with a short cross to Kyle Lehnert, who tried to score with a brilliant back heelflip that was slipping just wide before Kondo crashed the post and redirected it to the back of the net.

“Coach the whole season has talked about guys are going to hit you, but just play through it,” Mohamed said. “I just tried my best to play through it.”

Folger’s goal prompted a quick change by Braun to push speed demon Joe von Storch back to right back from his usual forward spot. The senior was instrumental in containing the Jamestown attack for the most part after the early goal.

“Joe is so athletic and versatile that you can kind of play him anywhere,” Braun said. “I just thought today he’d do a good job helping the defense and he did a great job.”

Lehnert scored the Black Knights’ opening goal, equalizing after an early Michael Meese goal for Jamestown. Lehnert let it rip after Brickhouse flicked it to him, evening the game just five minutes after Meese put Jamestown on the board.

Lehnert’s goal seemed to allow Charlottesville to settle in and play their game, creating chances and staying aggressive.

“Playing for each other, and moving for each other — we’ve tried two different formations and this one has been the best for us,” Mohamed said. “When we go on attack, we move our midfielders forward because everyone is a goal scorer on this team.”

The Black Knights showed a little bit of that against the Eagles in the semifinal. They may need even more it against Chancellor in Saturday’s title game. They’ll get the chance at 11 a.m. at Roanoke College.

By Ben Sheridan / Scrimmageplaycva.com contributor   It’s not about how you start, but how you...