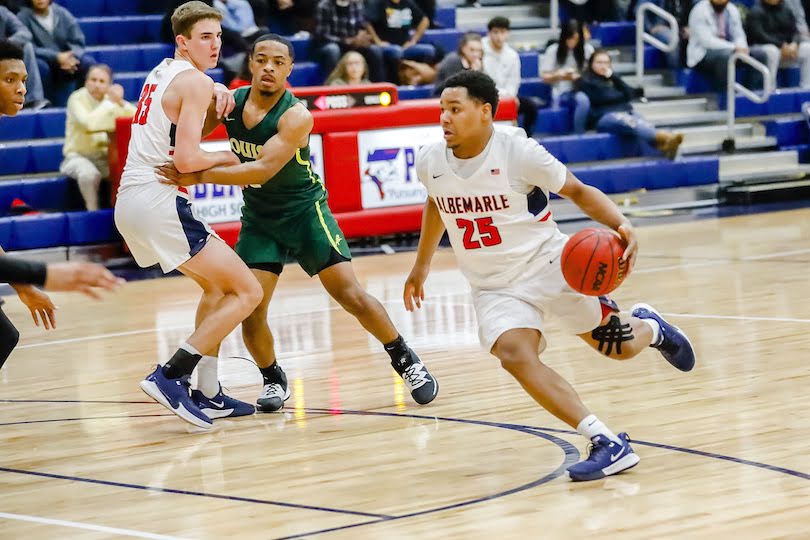 Because of the nature of VHSL alignment and the VISAA split, a lot of local teams can be frontrunners at this point in the year as we start to head toward the postseason.

And there are a ton of teams in the driver’s seat in their district, region or conference. We’ll probably miss a couple, but here’s the rundown of a bunch of squads that have positioned themselves extremely well.

The Charlottesville boys and girls are both sitting atop the Jefferson District standings and in good shape for the Region 3C tournament that’s coming up in mid-February. The Black Knights’ boys squad picked up a huge win over Louisa County last week and with the Lions falling to Albemarle before clashing with CHS, Charlottesville are comfortably in first place for the moment. The Black Knights are packed with weapons and a lot of confident shooters in Zy Faulkner, Nick Motley, Jake Bowling and Isaiah Washington while Christian Stewart has proven to be the glue guy that fills a lot of the gaps.

The Black Knights’ girls squad is also atop the Jefferson District standings with Andrea Lefkowitz emerging as one of the area’s most reliable scoring and rebounding threats this year to complement a wealth of CHS guards that were already a known entity.

Goochland’s boys and girls teams are both leading the James River District, with the girls at 10-0 in district play while the boys are 12-2 overall after a close loss on the road to Nottoway Monday night. The boys knocked off a team much higher in classification over the weekend, beating Clover Hill thanks to a Kam Holman 3-pointer at the buzzer. Whether it’s James Bell, Quincy Snead or Holman, night in and night out someone is stepping up for the Bulldogs. Goochland has six games in the next 12 days including a rematch with Buckingham and a clash with Fluvanna, so this will be a crucial stretch for the Bulldogs. They’ve got to bounce back quickly from dropping the road game with Nottoway. The Goochland girls cruised past the James River’s No. 2 squad Cumberland by 15 points 10 days ago and they’ve gotten solid performances from senior Victoria Lopez. Lopez has played extremely well of late, with 12 points and nine boards against Randolph Henry and 23 points and 13 boards against Amelia.

The William Monroe girls, who beat Fluvanna Monday night, are in control of the Northwestern District slate currently with a 5-0 start and one calculation has them atop the Region 3B rankings as well, which would give them home court advantage in the region tournament. Martha Apple has continued to be a double double machine — she averages a double double in points and boards — while Hailey Morris has become a more adept distributor while remaining a 3-point threat. Throw in the grittiness of Iyanna Carey and Ella Weaver’s development and the Dragons have something cooking right now.

The Blue Ridge boys dealt the first major blow in the VIC Division I race with their win over Miller that was the product of stifling, suffocating defense. The Barons are too good on that end of the floor for most opponents and they’ve got an array of offensive weapons like William Lee who’s been red hot lately.

The STAB boys are in first place in the Prep League — that’s not something that has been the case very often in the last few years as one of the state’s premier conferences makes it tough for anyone to stay on top long. Big wins over Trinity Episcopal and St. Christopher’s last week solidified the Saints as the big winners in the first half of Prep League play, but they’ve got to run that gauntlet again. With the Saints’ depth and talent, this has the makings of a special season.

That’s a lot of frontrunners that are already established though, and while there’s a lot of work to be done, things are shaping up nicely ahead of the postseason for a pack of local squads.

Here are a few players (this week it’s pairs of players and a trio) who are playing particularly well lately.

It was an impressive week for The Governors’ senior backcourt tandem. Carter, a 5-foot-11 sharpshooter who has knocked down 42 3-pointers this year, reached 1,000 career points. He’s averaging 13.5 points per game and having another strong season. Wilson, meanwhile, is averaging 13.5 points per game and dropped 28 on Altavista in a key win last week and 26 against Monroe Monday night in a loss. The Governors have a tough week ahead with a road trip to Gretna Tuesday and a home game against Dan River Friday. Both Wilson and Carter (and sophomore post player Jaren Purvis who had a monster dunk last week while averaging 14.5 points and 12.6 points per game) will need to be locked in for the Governors to make some noise in those two tough battles.

It’s hard to overstate what a big week STAB had, with an overtime win over Trinity Episcopal and a rare road win over St. Christopher’s (first time in six years for STAB). Taylor and Poindexter are huge reasons why. Taylor, just a sophomore, plays well beyond his years and Poindexter has taken a serious leap forward as a senior, putting up 12.9 points and dishing out 5.3 assists per game while hitting clutch shots like the gamewinner against Trinity. Taylor is a stat sheet stuffer who impacts the game in so many ways as a distributor, rebounder and scorer. Their steady presence is helping STAB’s otherwise youthful roster (outside of senior standout Nic Reese) develop quickly while facing some tough opponents.

A little inside-outside game is exactly what Younger and Lefkowitz are giving the Black Knights and they’ve pushed Charlottesville to the top of the Jefferson District heap, up a game on the pack at least for now. The JD girls race is absolutely bonkers, so that could change at any moment. Lefkowitz joins Marquelah Wilson and Sydney Sherman as the most capable, productive post players in the district now while Younger continues to steady the Black Knights each and every night. How that tandem manages things down the stretch is going to be critical to how the district race plays out.

It’s hard to pick two of these three Barons for a tag team, they’re all playing extremely well right now. They’ve all three been lockdown defenders, they’ve all been scorers at times and they’ve all done their fair share of setting the table for the rest of the Barons. Jerome had five assists against Miller and Oak Hill-Red while Lee scored 19 against the Mavericks, 24 in a loss to the Hun School and 16 in the Barons’ last outing. Gray is perhaps the area’s steadiest, most proven point guard (Louisa’s Jarett Hunter and STAB’s Poindexter are also in that debate) and has regularly put up assists and points while orchestrating that defense.

The basics: This is a critical game for both squads as the Patriots look to keep a recent three-game district win streak going while the Flucos need a jumpstart with four games left on the district slate. Fluvanna isn’t necessarily in playoff mode yet, but in some ways the Flucos are. Region 3C is loaded, and Charlottesville and Western are sitting above the Flucos record-wise. The Flucos have the guards to get things done especially when Nevaeh Ivory is healthy and playing at full speed. But her injury late against Western helped the Warriors pull out a critical victory for Western. Albemarle counters with Sylvie Jackson, adept at putting together monster stat nights in points, boards and steals — she’s just a baller. Both teams play solid team defense, as evidenced by the 44-38 Albemarle win back in early January where both squads had to fight for every bucket.

Key matchup: Fluvanna’s post players take on Jackson, MarQuelah Wilson and Amaya Pendelton. The Patriots have three solid rebounders in Jackson, Wilson and Pendelton, all in the area’s top 15 in rebounds per game. The Flucos only have one reboundner in the top 15, Khyariah Davis-Heinrich, so they’ve got work to do to make sure they don’t allow Albemarle second chance opportunities and perhaps create a few themselves.

The line: Albemarle by 1. The Patriots get the edge at home, but don’t be surprised if the Flucos vault themselves back into the top tier of the JD here.

The basics: Charlottesville’s win over Louisa Friday allowed the Black Knights to take control of the top spot in the Jefferson District, but there are no nights off in the JD. The Black Knights now face a rematch with the Patriots, who they edged back in December. The top four in the district can simply beat each other on any given night. This clash will pit Charlottesville’s quartet of fast playmakers against an Albemarle supporting cast around Josh Morse that has been slowly coming around, picking up a win against Western and then another victory over Louisa last week that kept the Patriots in the district mix. Can Dasaun Taylor, Cameron Johnson, Kywan Washington and Justin Murkey keep Albemarle rolling and make some serious noise by upending Charlottesville?

Key matchup: Charlottesville’s Christian Stewart takes on Albemarle’s Morse down low. Morse has been so productive lately, just filling it up averaging a double double. Stewart may not be close to Morse’s 18.3 points per game, but he’s not far off a double double himself with 10.3 points and 7.4 rebounds per game and he’s an athletic presence in the paint who plays taller than his 6-foot-3 listing. Look for Stewart and Morse to battle it out the entire game.

The basics: Despite an incredible first half of the regular season, the STAB girls are actually not in first in the LIS — they had a rare slip up against St. Gertrude a couple of weeks back that’s significant. But they’ve already beaten Trinity Episcopal twice and Collegiate once and they’ll get St. Gertrude at home again in early February so don’t be surprised if STAB gets up there in the top spot again shortly. In the meantime, the Saints are ranked No. 2 in the VISAA Division I poll, which matters a little more when tourney time rolls around. To stay there, they’ve got to take care of business against Collegiate, who they dropped 62-41 January 10. There’s very little margin of error because of that St. Gertrude loss, so STAB has to be locked in every night. That hasn’t been a problem with the leadership and maturity beyond their years that STAB has shown.

Key matchup: Collegiate’s defense contends with Daija Bennett and Mo Johnson. The Saints got 19 points from Daija Bennett in the first matchup while Mo Johnson had a near miss on a triple double with nine points, 10 rebounds and eight assists. A repeat performance by both would be a huge lift and Collegiate will have its work cut out for them trying to avoid a repeat.

The line: STAB by six. The Saints know what’s on the line.