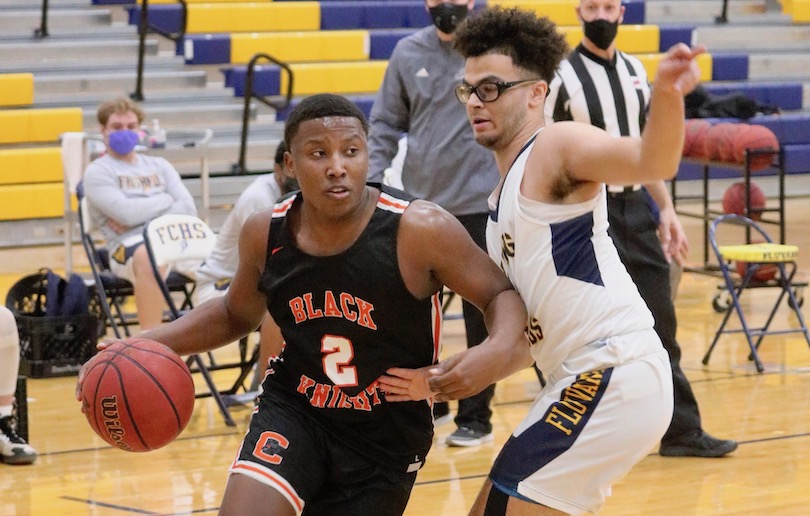 It has quickly become the refrain of the 2020-2021 basketball season because it’s perfectly accurate.

“Before the game started, coach said play like this is our last game,” said Charlottesville’s Chris Stewart. “We didn’t think we were going to have a season or anything.”

The Black Knights got at least one game as of Tuesday night, beating Fluvanna County 67-56 in a long-awaited season opener where the Black Knights’ senior core shined, with Zymir Faulkner leading the way with 21 points, Stewart notching 10 points and Nick Motley scoring nine while Quincy Edwards played some big time defense against Fluvanna’s explosive offense.

“We’ve just been waiting, these guys have been wanting to get out there and competing,” said Charlottesville assistant coach Andy Jones who filled in for Mitch Minor who had surgery in December and is sitting out for medical reasons. “All this anxiety that’s built up about whether we were going to play or not, the guys came out with some intensity and they had fun. We’re very, very appreciative of Charlottesville City Schools, our administrative team and (athletic director) Rodney Redd for making things safe for us to continue. Just the opportunity to play has given us a lot of joy.”

The Black Knights (1-0) built a 19-point lead, but had to withstand a furious Fluvanna rally to make it hold up as a win. The Flucos (3-1) cut into the lead with a solid third quarter, but they did the bulk of their work in the opening minutes of the fourth quarter, with Xavier Copeland, who finished with 24 points and 15 rebounds, transforming the game. Copeland had a steal and a quick bucket to cut the lead to just five points with under six minutes to go.

“He really provided the energy for us to cut into the lead,” said Fluvanna coach Heath Bralley. “In the first half we turned it over and didn’t rebound but X brought the energy tonight which carried over in the second half.”

But the Black Knights settled back in and ripped off a run of their own with Stewart, scoring after recovering a block by Copeland, then Faulkner with two and the foul. Fluvanna scored but Charlottesville stayed on track and Stewart had a putback before Faulkner buried a 3-pointer to finish off a 10-2 run with 3:35 to play. Stewart’s physicality in particular helped the Black Knights counter Copeland’s effort.

“When Chris is on his stuff and playing hard, we’re a top team,” Motley said. “When he’s not, it’s going to show because when he’s playing hard everyone is playing hard.”

Charlottesville then went to work on the clock with Motley doing a lot of the ball-handling.

“We needed Nick, we needed our point guard,” Stewart said. “We brought the ball out and wasted time and came together.”

The Black Knights built that huge early lead by countering some of Fluvanna’s early success — led by Kobe Edmonds who finished with 20 points — with an all out assault led by Khishon Gray in the first quarter. Gray knocked down three first half 3-pointers and finished with 11 points for the Black Knights.

“Khishon has been that good for years, he just didn’t have the confidence in himself, but now it’s showing,” Motley said. “He’s coming in and playing hard.”

Aidan Yates also chipped in a pair of three pointers and Da’Quanvion Hill did a good job attacking off the dribble and went 4-for-4 at the free throw line.

The Black Knights will now turn their attention to taking on Louisa County on the road Friday while Fluvanna will square off with Monticello on the road the same night.

Less than 24 hours after their loss to Western Albemarle on Friday, Fluvanna’s boys basketball team...

Albemarle boys basketball’s Josh Morse set the tone from the tip, scoring all 11 of his team’s...