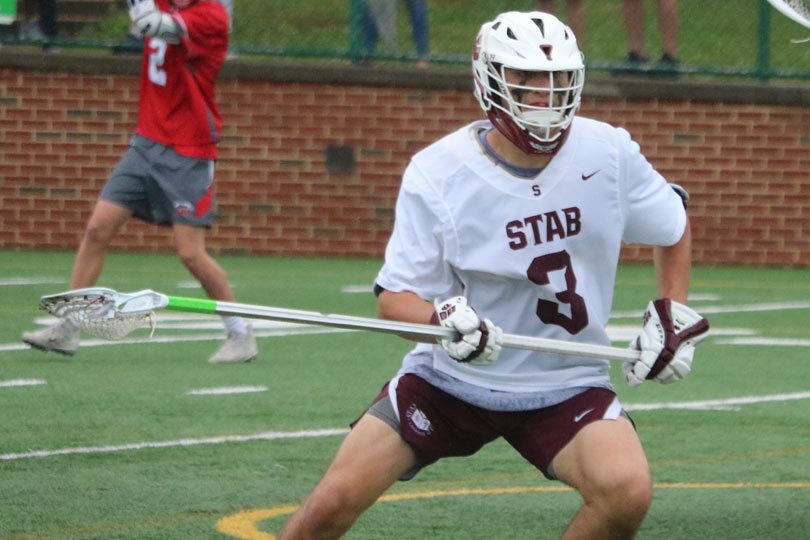 When St. Anne’s-Belfield boys lacrosse senior Doug Brooks gets to trigger a fastbreak like he did in the second half against Cape Henry in the VISAA Division I first round it’s pretty special.

“It’s really special, we have three great attackmen in Michael McGraw, Connor Shellenberger and Emmett (Barger) who can really spin the ball,” Brooks said. “Playing full speed and pushing it in transition is really fun. I can throw it to any of them and they can make a play”

Brooks didn’t pick up an assist on that fourth quarter fastbreak, but the Saints finished and thanks to a lot of plays like that, No. 6 STAB made short work of No. 11 Cape Henry in an 18-7 victory over the Dolphins. STAB advances to the state quarterfinals where they’ll face No. 3-seeded Episcopal on the road Tuesday.

“I really was happy with the way we shared the ball today and making one more pass,” said STAB coach Bo Perriello. “We really distributed the ball well and got some easier goals as a result.”

It helped that in a lot of cases they were playing make-it-take-it as Jago Gould had a big–time day on face-offs. Gould picked up eight ground balls and was instrumental to a 19-9 advantage on face-offs that STAB enjoyed. If they can scratch out a few more wins there in the upcoming games including Episcopal Tuesday, it would go a long way toward rectifying those one-goal losses the Saints have endured.

The Saints have now won four straight games after suffering through a series of one-goal losses against a tough schedule. Building some positive momentum going into a tournament where anyone in the top six in particular are capable of making a run.

“We had a nice stretch of games starting with the Western game,” Brooks said. “We just want to be playing our best lacrosse going into the playoffs. At the end of the day, if we’re in the playoffs, we’re alive.”

The Saints’ depth of experience all over the field should give them an edge this time of year too.

“With a big senior group they know what it takes, it’s do-or-die at this point,” Perriello said. “This first round game is always a bear to get through and we’re excited to look forward to Episcopal now.”

Buckingham County’s boys basketball team had to fight for it, but the Knights stayed unbeaten...