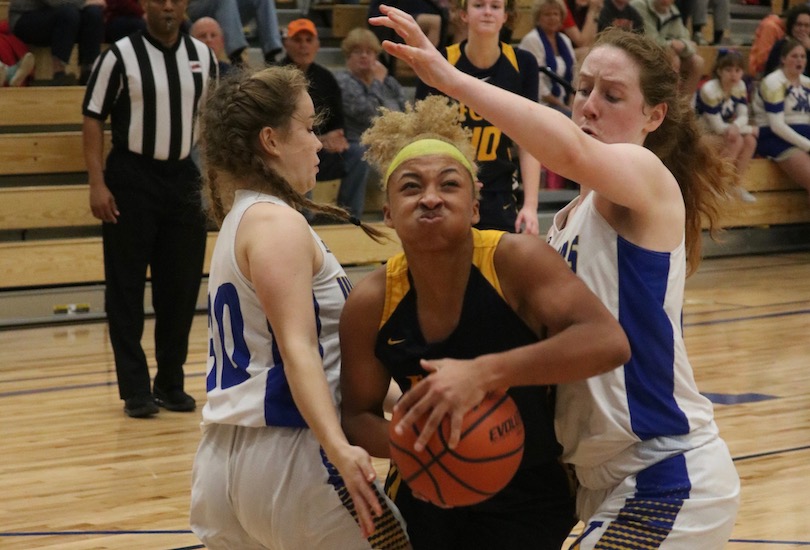 It was pretty simple. The last time Fluvanna County’s girls basketball team came to Crozet, senior Nevaeh Ivory gave up a key bucket down the stretch, got injured on the ensuing possession and the Flucos fell to the Warriors.

“We watched the last minute and 15 seconds probably four or five times,” said Fluvanna assistant Nick Ward. “She said three or four times this week, I want that chance back.”

Ivory got that opportunity and she didn’t need a gamewinner or a big defensive stop Friday, but she definitely got a different ending, as the Flucos beat the Warriors 47-39, extending Fluvanna’s season that would’ve likely been over with a loss to the Warriors.

“We all didn’t want the season to end so we just kept pushing through,” Ivory said.

When two hard-nosed defensive teams match up, it often comes down to who finishes strong and the Flucos finished strong. Fluvanna scored 17 points in fourth, pulling away from a Western team that struggled offensively but managed to cut the Flucos’ 8-point halftime lead down to four points with some help from Sydney Sherman scoring six of her 11 points in the fourth.

But the Flucos’ Mya Wright kept knocking down free throws — she went 6-for-6 in the fourth at the line — and that was enough to keep the Warriors at arm’s length.

“She’s shooting the ball really well and at the end she’s almost automatic from the foul line,” Ward said. “When we end practices with somebody making a free throw, they want her shooting.”

Wright finished with 14 points, including a couple of first half 3-pointers, giving the Flucos’ offense a needed jolt and continuing her progress since battling back from injuries earlier this year. Having another scorer get things going is huge for the Flucos and makes their point guard particularly happy.

“It really helps out a lot,” Ivory said.

The Flucos were locked in from the jump, but there was a particular moment where it was clear they were intent on this clash being different than their last meeting with the Warriors. Near the end of the third quarter, Jules Shepherd, who had seven points, missed a pair of free throws, then shortly after grabbed a rebound, missed a putback, then grabbed another rebound and finished it off.

“When I missed, I was like, nah I’ve gotta get these two points in,” Shepherd said. “It was really just I’ve got to go up there and finish.”

When Shepherd brings that kind of effort underneath, it changes the tenor for the Flucos, who’s defense has been there all year, but they’ve occasionally missed the offensive balance they had against Western. Ivory finished with 11 points and KeKe Davis had another eight. Eva Stribling chipped in four points in the second half, with those two buckets coming in critical spots.

In addition to Sherman’s 11, Western got seven points from Emma Herring and six points each from Mattie Shearer and Kate Wallace.

Because of the quirkiness of the Region 3C playoff picture, Fluvanna County desperately needed the win to keep its playoff hopes alive. With Monticello’s loss to Louisa, by virtue of being at a minimum the second furthest advancing Class 3 team in the Jefferson District tournament, the Flucos are now likely in. Western Albemarle could likely also get in as the wild card, but they now need some help in the form of Turner Ashby being the No. 2 team out of the Valley District. If the Knights aren’t the No. 2 representative, the Warriors would likely not pick up the wild card spot and get locked out.

The Flucos will now take on Albemarle at Albemarle on Monday in the Jefferson District semifinals while the Warriors will await their Region 3C fate. 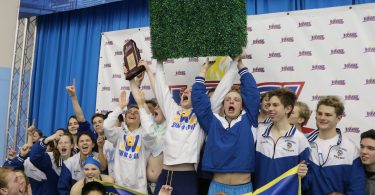 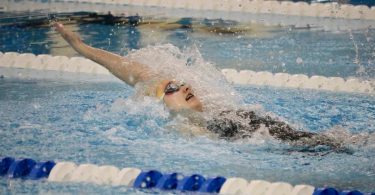 Monticello’s girls swim team wasn’t messing around on Friday in the Class 3 swim...