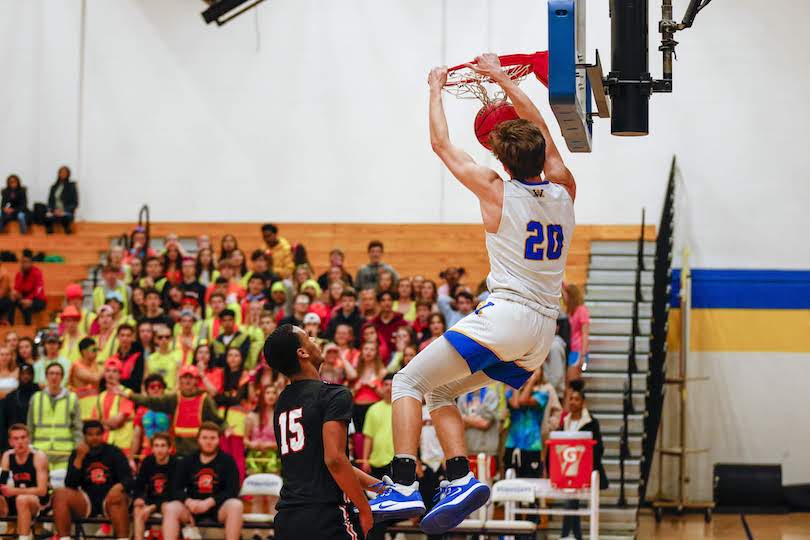 It may not be as much of a lost art as the midrange jumper, but the pump fake is definitely under utilized by most high school teams. Traditionally though, Western Albemarle’s boys squads have been masters of the art.

“I knew since we’re a bigger team that they’d go for pump fakes because they had to get up to our level,” Sime said. “I knew if I pump faked every time they’d go for it and I’d have a wide open lay-up.”

The Western victory took the Jefferson District boys race one step further toward complete chaos as it now opened the door for a three-way tie for the regular season district title if Charlottesville beats Louisa County on Tuesday night.

Sime pump faked his way to 16 points, 12 of them in the second half as he led a third quarter explosion by the Warriors that turned a narrow Western advantage into a 20-point lead by the start of the fourth. Western outscored Charlottesville 26-9 in the third, with Sime and Tommy Mangrum each scoring eight in the third while Andrew Shifflett notched six of his nine total points in the third to go with five rebounds, five assists and four steals.

Shifflett has proven particularly adept of late of attacking the basket to create space or finish at the rim.

“He’s been doing that really well, he’s been getting to the rim and finishing really well,” said Western coach Darren Maynard. “We shot better tonight than we did last game — we were good enough tonight to stretch it out a little bit.”

Mangrum, along with fellow seniors Riley Prichard and Angelo Garono, picked up a big win on his final regular season game in Crozet. Mangrum finished with 24 points, five rebounds and four steals. His early offensive efforts helped open things up for Sime in particular on the offensive end as Western’s size made things particularly tough on the Black Knights. While Sime was cleaning up on offense, Henry Sullivan was creating havoc on defense where he posted three blocks while pulling down seven total rebounds.

“I thought Henry played really well too and James Meenan came in and gave us some great minutes in the post,” Maynard said. “We always want to make that a factor, we’ve got a size advantage and I think we wore them down too, they weren’t able to sub being a little shorthanded.”

Charlottesville played without injured leading scorer Zymir Faulkner, who could be back Tuesday against Louisa. They handled that pretty well in the first half and trailed by just three, with Christian Stewart’s 14 first half points doing the heavy lifting.

“I thought the guys really stepped up and played well in the first half — the third quarter just totally got away from us,” said Charlottesville coach Mitch Minor. “We didn’t get the double teams in the post quick enough (in the second half) and that was a big difference for them.”

The Black Knights couldn’t withstand Western’s initial flurry in the third and it snowballed from there. Stewart finished with 15 and Isaiah Washington had 10 to round out the bulk of the Black Knights’ offense that was plagued by turnovers.

Western now awaits the start of the Jefferson District tournament while the Black Knights will look to finish the regular season slate against Louisa Tuesday night.