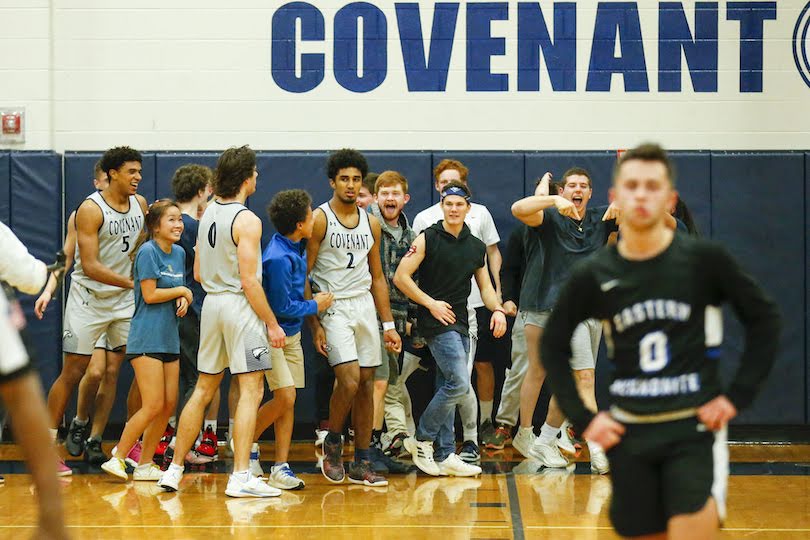 Covenant’s Jonas Sanker just took over down the stretch.

Almost one month to the day after Sanker scored 46 points against Eastern Mennonite in an overtime loss, he scored seven critical ones in the closing seconds to lift the Eagles to a win in the rematch.

Sanker hit a three, knocked down two free throws for the win and then stole the ball on the ensuing possession and jammed it home on the fastbreak as time expired.

Sanker finished with 25 points, eight rebounds, six assists and two steals including the game-sealing one. Eli Bennett finished with 10 points and five rebounds.

It was a back-and-forth clash with the Eagles taking an early 16-13 lead in the first quarter before Eastern Mennonite, the No. 2-ranked team in VISAA’s Division I, grabbed a 29-28 advantage by the end of the first half. The No. 6-ranked Eagles trailed by three going into the fourth, but Sanker’s incredible rally allowed them to escape with a win and avenge the January 9 60-58 overtime loss to the Flames. Sanker accounted for all but 12 of the Eagles’ points in that game.

Covenant (14-4) faces a quick turnaround as they battle STAB Friday at 7 p.m. at home.

By Ben Sheridan / Scrimmageplaycva.com contributor   It’s not about how you start, but how you...