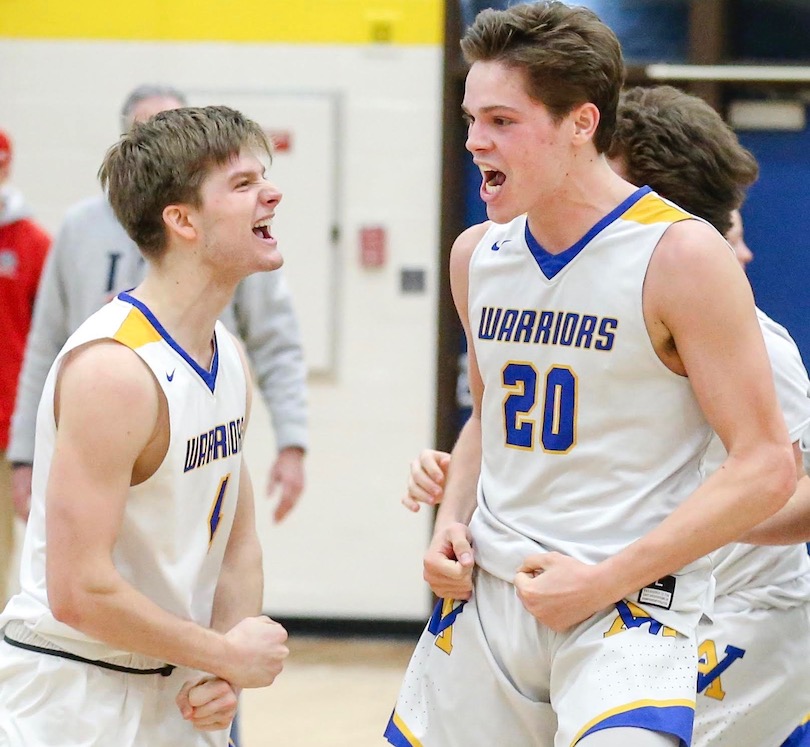 Seventy-two hours later, Prichard and the Warriors found themselves in another close battle, this time with visiting Liberty Christian Academy in the Regional Championship Game.

With the score deadlocked at 37 with less than 14 seconds remaining in regulation, Maynard entrusted Prichard to run the offense following the timeout. Only this time, instead of driving in, Prichard passed it off to fellow senior, Tommy Mangrum, and the reigning Jefferson District Player of the Year did the rest.

Mangrum dribbled inside the three-point arc and hit a contested jumper with no time left on the clock to seal a 39-37 win and a regional title for Western Albemarle. The game-winner hit the front of the rim before spinning around the circle and eventually dropping. Mangrum had picked up his dribble in the face of two LCA defenders, but after a quick glance at the clock, the veteran playmaker threw up a prayer, and it was answered.

The win secured Western Albemarle’s second regional title in the last three seasons. The 2018 Warriors won the region, before eventually reaching the state championship game, and Mangrum’s late game heroics were a major reason as to why. The then-sophomore hit a buzzer-beater over Hidden Valley in the state quarterfinals.

The sequence at the end of Friday’s game was the perfect redemption for Mangrum, who had missed the front-end of a one-and-one moments earlier. Maynard felt good knowing that the ball was in Mangrum’s hands in crunch time.

“We ran one of our normal plays there — we knew he would get the second screen and we were very comfortable with him shooting it,” Maynard said.

Mangrum finished Friday’s contest with 10 points. As exciting as Western’s second walk-off win as many games was, Friday’s result would not have been possible without the Warriors’ play on the defensive end of the court. Liberty Christian possessed the ball with less a minute to play, and seemed content to run the clock down the end before shooting.

The Warriors had one foul to give and were able to play aggressive in order to hopefully get a steal. After forcing his man close to the sideline, junior Andrew Shifflett deflected a pass, and Mangrum secured the loose ball, giving Western a chance to draw up the winning play.

Western Albemarle became the first team to hold Liberty Christian to under 40 points since E.C. Glass on January 30, 2018.

The Warriors allowed just 13 second half points, thanks in large part to switching to a zone defense.

LCA’s Jalen Leptwitch was deadly off of the dribble in the first half, but the alignment shift kept him out of the lane in the final two quarters. Leptwitch managed just four second half points, and had a difficult time moving around the long arms of Sullivan and the rest of Western’s lanky defense in the post.

“I’m astounded that we held them to 37 points. They were one of the best teams offensively that I have ever had to prepare for in my whole career,” Maynard said. “[Leptwitch] is a hard stop because we have to spread out on [LCA’s Connor Hartless and Rynning Bohrnstead] because they can really shoot the ball. You almost have to stop him one-on-one, which is tough,and [Shifflett] did a really nice job on that.”

Points were tough to come by for both teams, particularly in the second half, as both teams combined for just 28 total points. Sullivan led the Warriors with 13 points, but all but three of those came in the first three quarters. The outside shots weren’t falling for Western like they usually do, but the Warriors were exceptional out of timeouts.

Hartless knocked down a triple with 7:20 left in the game to give Liberty Christian its first lead since the closing seconds of the first quarter. After Maynard called his first timeout of the game, Prichard drove into the lane, retook the lead following a drive for two, plus a foul.

Several minutes later, LCA head coach Paul Redgate called a timeout after his team built a 37-35 advantage. No more than 20 seconds later, the game was tied following a runner by Sullivan.

Seven of Western’s 14 second-half points came after timeouts, including Mangrum’s game-winner. After dropping the Jefferson District title game one week ago against Charlottesville at the last second, Maynard felt that his team is more prepared to handle late-game situations.

“We’ve been in so many of these [close games] and about half of them didn’t come out our way — we learned a lot from those. I think we’re functioning pretty well down the stretch now,” Maynard said.

Prichard added 11 big points in Western’s win. Western led for the entire second and third quarters, after Sullivan beat first-quarter buzzer to put his team ahead by two. Western led by as many as eight in the first half, before LCA closed the second quarter on a 10-3 run, to pull to within a point at intermission.

The Warriors will await the loser of Saturday’s contest between Northside and Cave Spring. Western Albemarle defeated a 28-0 Northside team two years ago to reach the state finals.

Much of the 2020 roster was not around for the historic 2018 run, but Maynard has shared his memories of that special season with his young team, and is eager to build off the success of that run.

“I’m really happy with what we’ve done- to win a regional championship is a big deal,” Maynard said. “I think we’re a factor in the state, so we’re not just happy to be there- we’re going to try to make some noise.”