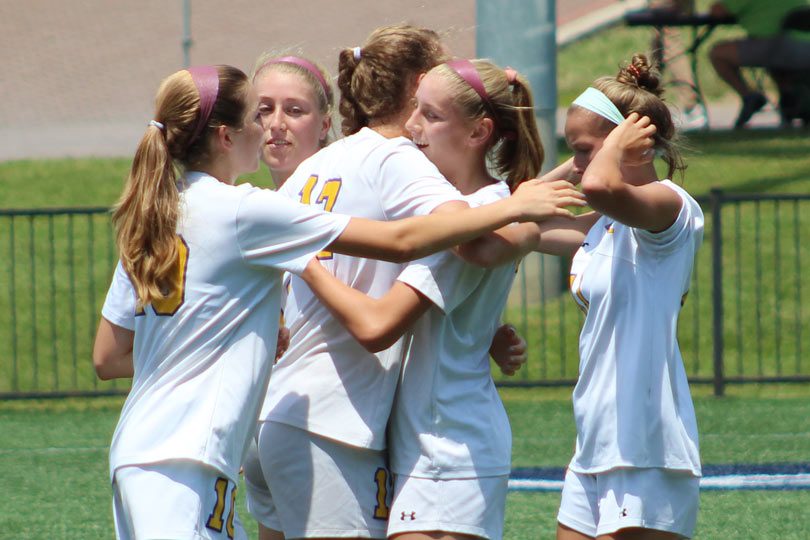 Call it whatever you want, but Western Albemarle’s girls soccer team was not happy with the squad’s offensive performance in the Class 3 state quarterfinals against Lord Botetourt.

They’re a lot happier after Friday.

The Warriors poured in five goals in a 5-0 victory over Hidden Valley Friday in the state semifinals against, scoring the first just seven minutes into the game and by controlling possession for almost the entire game, left little doubt in a runaway win over the Titans.

“I think we were all frustrated (after the state quarterfinals),” said Western junior Katrine Berg, who scored twice. “We were really trying to go forward and score early. We were trying to get one in there early in the game.”

The Warriors will square off with Brentsville Saturday at 2:40 p.m. in the Class 3 championship game at Roanoke College looking to repeat after winning the title in 2017.

“We started connecting right away, we were playing our game right from the get-go,” said Western senior Elisabeth Fabiano. “We’ve been here before, we have experience…so I think that definitely helped us as well.”

The first goal came when Abby Zimmerman got pinned in between a couple of defenders on a corner just in front of the goal. The corner got headed out initially, but Savannah Wilson redirected it back into the scrum where it somehow found Zimmerman and she headed it in. That early goal gave Julia Berg and the rest of the Warriors’ stout defense a sense of relief

“It’s a little bit of a relief for the defense — we feel more safe and more confident,” Berg said.

That confidence only jumped up when Julia’s sister Katrine Berg struck again 10 minutes later. Katrine Berg made it look easy on this one, driving to the right where no defender really stepped to her before casually ripping a crossbody strike back toward the left post that glided in easily.

That gave the Warriors a 2-0 cushion before halftime, but Western mashed the pedal down in the second half again, with Berg scoring on a wild one just a couple of minutes in when she got all the way to the endline and tried to cross the ball with an arcing pass but it drifted close to the goal instead and dropped in over the keeper’s head.

“It was going to be a cross but then it ended up going into the goal,” Katrine Berg said.

After that good fortune it was abundantly clear that it was the Warriors’ day. Zimmerman extended the lead to 4-0 with 23:09 left to play when she ran down and then converted a beautifully struck through ball by Jane Romness. Romness and the Warriors’ other midfielders were, as they often are, instrumental in the lockdown pressure that allowed the Warriors to maintain possession throughout, rejecting nearly every Hidden Valley attempt at advancement.

After that second Zimmerman goal, the Warriors mixed up the lineup and arrangement on the field, with Julia Berg moving up out of the defense and toward the top of the formation. With 6:59 left, Berg got on the board herself with a goal to push the Western lead out to 5-0.

“I love it, it takes a little bit to adjust but I love playing up there,” Berg said. “It’s fun playing with my sister sometimes.”

Now the Warriors hope that rejuvenated offense carries over into the state title match against Brentsville, the Northwestern District and Region 3B champions that beat Spotsylvania 2-0 Friday in the later semifinal. The match starts at 2:40 p.m.