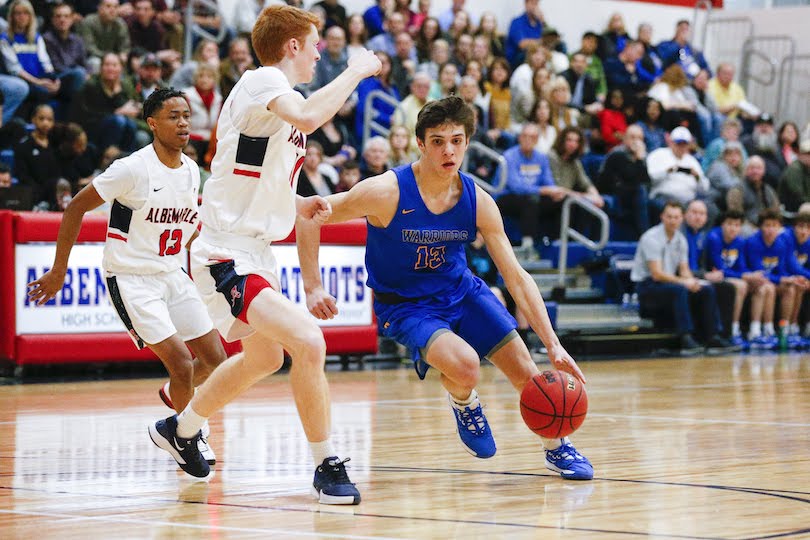 Playing for the fourth time this season, both teams know each other’s approach, their calls, their tendencies and their personnel.

There just aren’t any surprises, and it’s almost always going to come down to the closing seconds in a low-scoring affair.

“These games always are and when it’s allowed to be super physical too it makes it even uglier than they usually are,” said Western coach Darren Maynard.

Monday night, it came down to the wire again, with Tommy Mangrum proving the offensive difference-maker with 18 points for Western Albemarle in a 37-34 Jefferson District semifinal win over the Patriots.

“We didn’t get a lot of offense, but what we got he gave us,” Maynard said.

With Albemarle’s main post threat and leading scorer Josh Morse on the shelf, Western was able to defend the lane well and prevent the Patriots’ array of slashers from getting into the paint. While Henry Sullivan was mired in foul trouble for the Warriors, they got solid minutes from Lucas Farmer who had six rebounds and made life tough on the Patriots on that end.

The Warriors’ height was clearly an advantage, but their leading rebounder wasn’t anyone in the post.

“I thought Andrew Shifflett played awesome,” Maynard said. “He came up really big. Andrew is a phenomenal rebounder for a guard.”

Shifflett, who also had seven points, knifed his way into the lane repeatedly and hauled in 12 defensive rebounds, snuffing out the opportunity for second chance points for Albemarle.

Shifflett’s rebounding effort forced Albemarle to get any offense it could in system and on the first attempt. Justin Murkey got some of that going with 11 points on the night and Chris Woods knocked down a couple of second half 3-pointers. But Albemarle couldn’t get to the free throw line (they went just 3-for-4 for the game there) and couldn’t get enough of that offense going with Western locked in.

“I love the effort in my team every night we play and it was there again tonight,” said Albemarle coach Greg Maynard. “It’s tough to win a basketball game only scoring 34 points and it was really physical inside. It was tough to score on them and tough to rebound but our defense was superb all night.”

The Warriors will now take on Charlottesville High Tuesday night at Albemarle (the host by virtue of the Albemarle girls being the highest-remaining seed in that bracket) in the Jefferson District tournament title game. The Patriots will turn their focus to a Region 5D quarterfinal playoff game at home Friday against Brooke Point.

By Ben Sheridan / Scrimmageplaycva.com contributor   One quarter proved to be the difference... 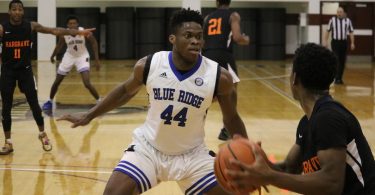 It wasn’t technically over at that point.    But it kind of was.   When Blue Ridge’s Andy...