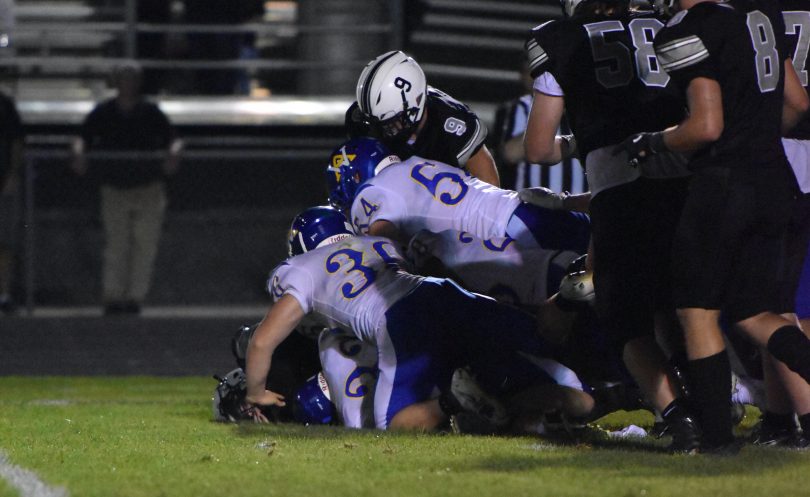 Never mind that Western Albemarle averaged 41 points in its first two games, and Turner Ashby hung 41 at Monticello last week. Trade in those turf-field conditions for old school moderately-tall natural grass and not-quite-perfect lines, and you’ve got just the right setting for a throwback Valley battle of run-first teams.

“That loss two years ago really stuck with us, and we were hungry tonight,” said Western senior Carson Tujague.

With Western pitching a shutout, two second-quarter scores were plenty to secure a 13-0 victory.

“Really proud of our defense tonight,” said Western coach Ed Redmond. “They really dug in the second half after we lost field position early.”

The old road-game adage proved true as the Warriors’ defense traveled to Bridgewater, holding the Knights’ wing-T attack under 100 yards of offense in each half and winning the turnover margin plus-two.

“One of our coaches’ biggest sayings is ‘make them snap it again’ and that’s what we did,” said Tujague, who played linebacker on a defensive unit that forced three second-half red zone turnovers as an effective remedy for field position disadvantage. “At the end, the only line that matters is the goal line and we stopped them before that.”

When TA took over at its own 43 early in the fourth quarter, Western forced them to grind out 14 plays over seven-plus minutes to reach the 4 yardline. On the fifteenth play, senior defensive lineman Spencer Burnette recovered a fumble in the backfield.

“We shouldn’t have been running at number 28 (Tujague),” said Turner Ashby coach Chris Fraser. “We ran right to him and he stripped the ball with a good hit. In the second half, we had the ball in the red zone three times and couldn’t score. It’s as simple as that to me.”

Both offenses enjoyed some first-quarter success, mixing in a few passes and advancing beyond midfield on each of their first two series. Western reached the TA 25 on its opening possession before pressure forced sophomore quarterback Nathan Simon into a grounding penalty. The drive ended on the next play when the Knights’ Gage Kelley recovered a Bubba Shifflett fumble. However, Western returned the favor on TA’s ensuing series by swarming quarterback Cole Hoover and forcing a sack-fumble near midfield.

“It was sort of a back-and-forth first quarter so we tweaked our scheme a little bit,” Redmond said. “We went to more of our goal line front. We just felt like we needed enough bodies up there to stop the power attack. I think execution was also a big part of it; we were doing a good job reading keys.”

The big break came when Western briefly tipped field position in its favor early in the second quarter. Thanks to an offensive facemask penalty followed by a third-and-long sack, the Knights had to punt from deep in their own end, and some good pressure forced a shank that set up the offense at the TA 20. It took six plays, but senior fullback Dakota Howell plunged in from a yard out to give Western the lead with 6:09 left in the half. During the drive, Howell also hauled in a 14-yard reception to convert a third down.

The teams exchanged punts until Western took over at its own 23 with 52 seconds left on the clock. After a first-down run, it was time for the biggest play of the night.

“Again, we didn’t have great field position, but we got a play we liked and a kid we liked, and they just executed it,” Redmond said.

Simon, who spent a chunk of the second quarter tossing increasingly-long passes by the Western bench, bought time by rolling out to his right and then uncorked a deep strike down the right sideline for his 6’ 4” tight end. Tujague caught it in stride 50 yards downfield and took it the rest of the way for a 73-yard touchdown.

“The big key was Joey [Burch] running a post and drawing the defense off; that left me wide open for Nathan to deliver a great pass,” said Tujague, who finished with three catches for 121 yards.

The two-score edge certainly helped the Warriors breathe easier as the offense did not take a snap on TA’s side of midfield in the second half until the final play of the game. That victory-formation kneel down followed a 72-yard catch-and-run by Joey Burch to convert third-and-9. Simon finished 5-of-9 through the air for 207 yards.

With the Warriors stuck in their own end, TA had several prime opportunities to get on the board. After a short punt and good return midway through the third, the Knights’ offense was set up as the WA 19. After five plays, they faced third-and-goal at the 6. As the defense converged on senior running back Sam Shickel at the line of scrimmage, the ball popped out and the Warriors recovered.

After a three-and-out from inside their own 10, TA began the fourth quarter by again starting in Western territory. Burch ended this threat on the third play of the series with an interception at the 18. The Knights’ defense responded with a turnover of their own, stripping Tujague after a 35-yard reception looked like it would flip the field for Western. That brought the TA offense back out for its fourth and final possession of the second half.

Shickel led the Knights with 21 rushes for 43 yards. Hoover completed 9-of-12 passes for 83 yards. Kelley was his top target with four catches for 38 yards.

Western (3-0, 1-0) will take the interstate the other direction next Friday for a showdown at new Jefferson District member Goochland (2-1, 0-0). 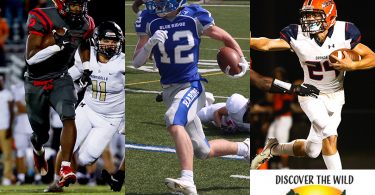 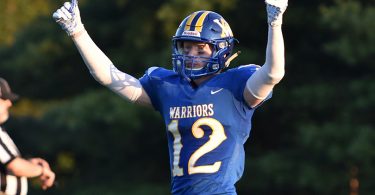 This week we sit down with Western Albemarle’s Joey Burch, the Warriors’...