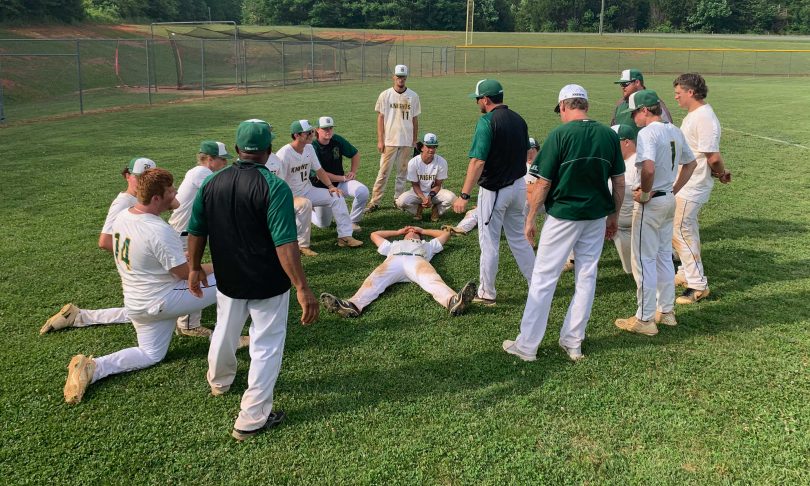 The sense of relief  from the players afterwards was palpable, they got it over with and were glad to be done. Still, playing in its first ever home state playoff game, the Buckingham baseball team didn’t look uncomfortable on the field. For a young team, the Knights did not show their age.

Maybe some of that came from the fact while this is unfamiliar territory, playing fellow James River District foe Randolph-Henry offered some sense of familiarity. Of course that can cut both ways too and maybe that’s why there was relief afterwards. If you’re going to lose your first-ever state quarterfinal game, don’t do it to a district rival.

“I was really actually worried that we’d come out and take them for granted and we couldn’t do that because we know that’s a very good baseball team over there that hasn’t lost but five games this year,” said Knights coach Trey Lawson. “The guys tried to give me a heart attack a few times last week so this was a good change of pace. We had it all, good pitching, good defense and took care of business hitting. I told the guys before hand, ‘Let’s take the names off the jersey’s and just go out there and play,’ and that’s exactly what they did, played like it wasn’t a team we see every year at least two times.”

Complacency was not the case on Tuesday. Instead the Knights gave a packed Dillwyn crowd a great effort from start to finish as they cruised to a 6-1 win behind a well-rounded performance on the mound, in the field and at the plate to provide Lawson a cardiac reprieve.

“This has been our recipe so far,” Lawson said. “Last week they tried to give me a heart attack. There was one moment there in the fourth I was worried but then Justin Gunter walked back into the dug out and said ‘Coach, you ain’t gotta worry, they aren’t scoring a bunch of runs on us today,’ and that was that.”

Buckingham wasted little time getting out in front with Braedyn Schaeffer leading off in the bottom of the first with a double only to score during the next at-bat with Rocco Raynor coming up with an RBI double to centerfield.

From there, it was about Gunter who got the start for Buckingham as he efficiently managed his way through the Randolph Henry lineup and the defense behind him played at a very high level. Gunter worked through five innings and was only tagged for a RBI sacrifice fly in the top of the fourth inning.

“I didn’t really have my (velocity), I just came out and tried to use my off speed stuff and hit the corners,”Gunter said. “(With my defense) it made it a lot easier, being comfortable on the mound being able to pitch to contact.”

The Knights gave Gunter room to breath in the third inning when Camden Allen came through an RBI double, Cameron Newton with an RBI single and then Jake Carter capping the rally off with an RBI double to make it 4-0 at the time.

“We could have had a better start but then (in the third and fourth) we pulled through,” Carter said. “We knew we couldn’t take it, take them easy because they’re a tough team. Those other games were tough so we knew we had to come through.”

After the Statesmen cut the lead to three, the Knights answered with another quick burst of offense featuring a 2-run single from Eli Bryant to make it 6-1 in the bottom of the fourth.

In the fifth, Gunter was able to work his way out of a big jam, the bases loaded with no outs. The Buckingham defense aided on that front with a fielder’s choice and great play (one of a handful on the day) from second basemen George Hurt sandwiched between a strikeout.

“Our defense, I mean it’s been there all year, it’s been huge for us,” Lawson said. “If you take out that one bad game at the beginning of the year against Nelson, our fielding percentages are just through the roof. Our guys are busting their butts out there and I’ll tell you what, George Hurt, that kid made the kind of plays we’ve seen him make all year out there. The defense has been huge for us.”

The Knights turned to Bryant and Daniel Farrish to get through the six and seventh innings. And fittingly enough, the game ended with catcher Holden Tyson gunning down a napping base runner at second.

Buckingham heads to its first state semifinal in program history where it faces John Battle in the Class 2A semifinals on Friday in Salem at 1 p.m.