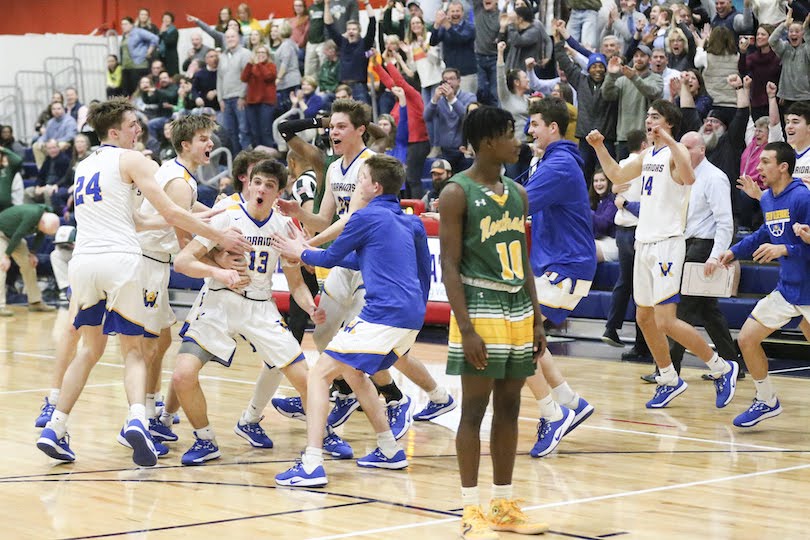 Western Albemarle’s 2020 playoff buzzer-beater club was just founded a week and a half ago, but the membership roll is starting to fill up fast.

Add Andrew Shifflett to a list that already included Henry Sullivan and Tommy Mangrum after their heroics in the Region 3C tournament.

“We really stick together throughout all our games,” Shifflett said. “We have a tight-knit group and we really trust each other through and through.”

Friday night that trust showed up in another big moment as Shifflett snagged a third-chance rebound and put it back as the buzzer sounded for a 51-49 victory over Northside in the Class 3 state quarterfinals, punching the Warriors’ ticket to the state final four for the second time in three years. Western is now potentially two wins away from the boys basketball program’s first ever state title.

“He loves basketball, he loves this team and it’s so gratifying when you hit a game-winning shot so for him to go through that same experience it’s just fantastic,” Mangrum said. “I’m so happy for him.”

The Warriors were down 49-46 with time running out in the fourth when Mangrum buried a 3-pointer with under two minutes to play, throwing a Ty Jerome-style pass fake to his right to create a wide open three. That tied the game at 49-49. Then on the defensive end, Henry Sullivan came up with a block to set the stage for Western to hold for the last shot.

Out of a timeout with 11.3 seconds left, Mangrum got a pretty good look at a 3 after a Riley Prichard handoff. Mangrum missed and the ball careened back toward the middle of the lane. Sullivan attempted a tip-in but it came up short and arced right into Shifflett’s hands. Shifflett elevated, finished, and took off running seemingly knowing it was in.

“I saw it go in, but wanted to make sure there wasn’t time left on the clock, but once I knew that it was a rush of emotions and trying to take in everything that was happening at that time,” Shifflett said.

The bucket capped a huge surge by the Warriors who were down by eight midway through the third, and then were down five by the start of the fourth. Northside’s offense sputtered after a Western timeout with 4:32 left in the third, scoring just 10 points in the final 12:32 while Western got a huge 3-pointer from Riley Prichard early in the fourth quarter.

“I know we needed to score a little bit because Tommy had really carried us the entire game,” Prichard said. “We were trying to stop their momentum.”

That three tied the game at 42-42 and the Vikings and Warriors traded punches until the closing minutes when Western just made the right plays at the right time. Particularly that final one.

“Andrew Shifflett, that’s an awfully big basket,” said Western coach Darren Maynard. “And Henry Sullivan keeping it alive on the tip, that’s a huge play. He’s made a lot of them late in games here recently.”

Northside built that lead largely on the strength of Ayrion Journiette’s offense as the sophomore guard poured in 21 points and gave Western fits. Jamison Foley was also rolling with 15 points for the Vikings. But Journiette’s explosion forced Western to adjust.

“He was hitting pull-up jumpers and was just really tough to defend,” Shifflett said. “We ended up face guarding him, Lachlan Murphy did a really good job with that, slowing him down and stopping his run. That really helped us out.”

Western got 21 points from Mangrum in the win with nine points each coming from Josh Sime and Prichard. Prichard also had three assists while Sullivan hauled in four rebounds and Shifflett chipped in four boards.

The Warriors will travel to Suffolk to square off with Lakeland next week in the state semifinals. Then they’ll get to see if one of Central Virginia’s fastest growing clubs can add another member.

Video: Another Western Albemarle boys basketball buzzer beater, Andrew Shifflett with the honors this time to beat Northside 51-49 in the Class 3 state quarterfinals. Instant Video brought to you by Blue Ridge School: Built for Boys