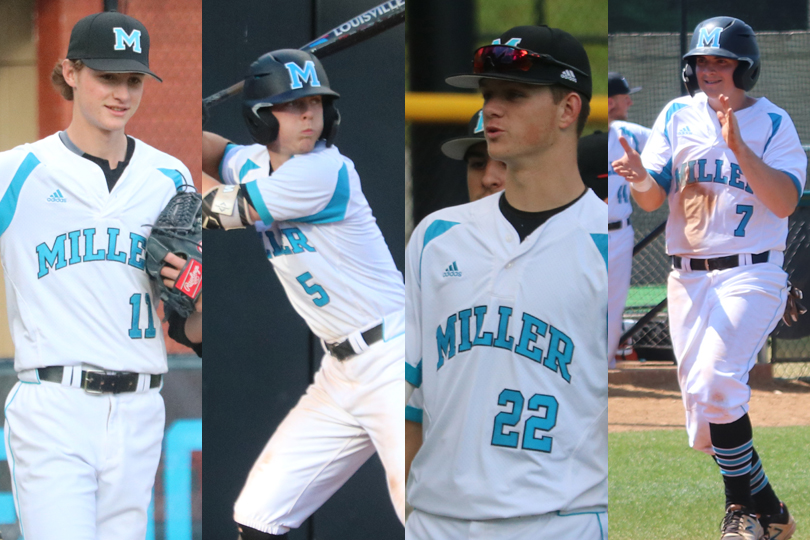 There was a possibility that Garrett Payne never comes out of the Miller baseball team’s dugout a year ago. In an alternate timeline, Ian Haney, a pitcher who’d only had a handful of at bats all year heads to the batter’s box.

“Coach was like, we need someone to pinch hit and Garrett is like I’ll hit,” said Miller first baseman Jack Marshall. “And he’s taking forever to get ready.”

Payne was taking awhile to get geared up for the at bat, prompting coach Billy Wagner to momentarily reverse course and decide to send Haney out anyway with the Mavs down 10-1. Payne picked up the pace though and made it clear he was hitting.

“I’ve talked to my dad about that and he’s like, thank God Garrett got into that batter’s box,” said Miller leadoff man Jeremy Wagner. “I mean, Garrett had a bunch of stuff and chains on. He was trying to get all that off, and Ian was like, I’m just going to go hit Garrett. But Garrett grabbed the bat, ripped the chains off and went right out there.”

Payne headed to the batter’s box after not taking as much as a cut all day, resting for his potential start on the hill in the championship game the next day. Instead, he stepped in against lefty Harrison Clifton, a Steward senior headed to Richmond next year.

“I knew he was probably comfortable,and wasn’t really planning on throwing much off-speed,” Payne said. “So I got a first pitch fastball, looked at it cause it is my first at bat of the game. Then got a second pitch curveball and after that I knew he was probably going to come in with the fastball, which he did outside. I poked it to right center and it just kept going and going and going.”

Payne unleashed that leadoff solo shot and in turn got Miller going in an improbable nine-run rally that kept the Mavericks’ season alive and eventually ended in Miller’s third straight state championship.

Miller’s core group of returning seniors — Wagner, Chenault, Marshall and Payne and William Stafford — didn’t get a chance to defend that championship because of the COVID-19 cancellations and it’s particularly unfortunate because this year’s group was shaping up to be a special one. The Mavericks were moving up to VISAA’s Division I, home to several other powerhouse programs, so things definitely weren’t going to be easy, but it was a special group with a lot of young and fresh talent like senior transfer Jordan Peyton as well as Henry Hardie, Nathan Fink, Jacob Exum, Laken Tignor, Drue Hackenberg and Noah Murray teaming up with that core group of returners led by Wagner, Chenault, Marshall and Payne who are all set to play college baseball next season.

“I thought we were going to be a great team,” said Miller’s Ethan Chenault. “I mean we’d come out in the preseason and MaxPreps and Perfect Game had recognized us as one of the top high school teams in the region. I’m not going to lie, our inner squads were very fun to watch. I mean, we had dudes on both sides of the ball, whether it was pitching, hitting or infield.”

That group is left instead with memories from three years of championships, starting with the first one under Billy Wagner in 2017 that was a redemption story of its own after a 2016 state semifinal loss ended another promising campaign. They were a part of the repeat group in 2018 that established Miller firmly as a VISAA baseball force and then they made the wild roller coaster of a run in 2019.

That run was unconventional from the first pitch as weather delays forced the play-in game to be held in Crozet, so Isle of Wight had to turn around after getting a win there and face Miller on the back end of the doubleheader in the state quarterfinals. Isle of Wight carried some momentum over from the play-in game at the plate and put the Mavericks in an immediate hole.

Payne worked through those early struggles in that one and the Mavericks’ lineup took care of business as the plate to turn a 3-0 hole into a 4-3 lead going into the second and essentially cruised from there. That set the stage for the nightmarish start to the state semifinal game days later against Steward.

“I started that game and anything that could have gone wrong went wrong,” Chenault said. “Whether I walked a guy or a ball found a hole or just anything. I believe they put up four runs on me, man. Just like that. And I was like, man, this sucks.”

Things continued to snowball for the Mavericks and they found themselves in a 10-1 hole after a brutal 7-run fourth by Steward who also tacked on two more runs in the fifth. There just weren’t many obvious paths to victory. In fact, the Mavericks’ mathematical chances of winning had been reduced to 0.11 percent.

“It got to the point where coach was like, alright, let’s get the seniors in that didn’t play,” Marshall said. “And we’re all sitting there like, wow, the season’s over.”

Then Payne rushed his way into the batter’s box and changed the course of the game. The runs started piling up quickly and then Lucas Adam unleashed a grand slam to left field that officially made it a ball game. Jeremy Wagner followed with a three-run shot to tie the game up at 10-10. After a solid inning of pitching from Hardie,  Miller picked it up again with Exum switching places with an RBI double to plate Hardie, Tignor matching Exum with another RBI double and then Wagner and Payne going back-to-back again for a 15-10 lead that proved insurmountable coming out of the sixth.

That left an understandably drained Miller squad staring down a state title game the next day, and the Mavericks made sure they didn’t leave anything to chance. Baseball players are notoriously superstitious anyway but some of Miller’s players took it to another level in the next 24 hours.

“It was me and three other guys or four other guys that rode with Jeremy in his truck to the game because we didn’t have enough room in the bus,” Chenault said. “So we show up to school the next day and we’re like, we aren’t changing a thing. You sit in the seat that you sat in yesterday, we’re going to miss the same exit that we missed yesterday.”

Before the semi-final, the contingent in the truck was supposed to stop and eat one place but they missed that exit and opted for a McDonald’s in the middle of nowhere a little further down the road. The truck group repeated the process the next day, intentionally missing the exit and heading to the same McDonald’s.

“Then we got out on the field and we listened to the same songs,” Wagner said.

The approach worked. Miller’s insane momentum carried over against Highland as the Mavericks unleashed a huge first inning to build an 8-0 lead, rolling to a 10-5 victory in the championship with Chenault knocking in three runs, Wagner scoring three times from the leadoff spot and Marshall contributing in a variety of ways. Payne took the mound and threw five innings, striking out four and allowing just three runs before Matt Sykes came in to close it out and end Miller’s season for the third straight time with a dogpile in the infield. 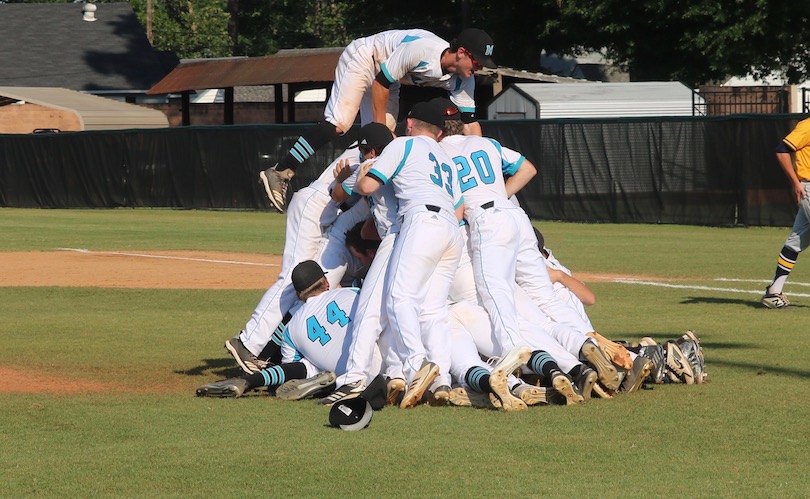 “We felt really good going into that game after having the offensive explosion that we had the day before we came into this game light like we felt good offensively and we knew Garrett was going to get on the mound and just pound the zone. We came out, we, we put it on them early.”

The fact that the Mavericks’ class of seniors didn’t get a shot to make it a four-peat is frustrating for them as a group, but with the bulk of the seniors headed to college to play there’s reason to be excited about the future. Payne is headed to North Carolina State, following former Mavericks Tanner Morris, Ethan Murray and Adam Hackenberg into the ACC. Chenault heads to UNC-Wilmington, a program that competed in the NCAA regionals in 2019. Marshall heads to Roanoke College where he follows a line of local products that have worn the Maroon. Jeremy Wagner will head to Austin Peay, a place that reminded of home and the Miller program when he visited there. Those opportunities and commitments continue Billy Wagner and his staff’s stated goal of developing the best student athletes on and off the field, setting players up for success no matter how long they continue to play baseball or what the Mavericks’ record finishes as at the end of a campaign.

“Growing up around (coach Wagner) makes me appreciate everything that he does for us and the school and it really shows that he cares about the players and not as much as the outcome of the game or the season,” Marshall said.

In part because of that approach, the outcomes — three straight titles — have been pretty special too. Sometimes methodical, sometimes seemingly inevitable, sometimes insane and unpredictable. That 2019 run and the bond it strengthened won’t fade.

“I’ve known most of these guys since I was eight, 10 years old,” Jeremy Wagner said. “We all played baseball together young and then and then the bond just kept growing which made it easier to play on the field like with each other.”

It’s easier to play when the guy beside you is family.

“They’re all brothers to me, which made it all better,” Payne said. 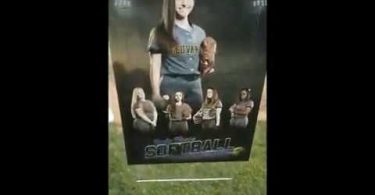