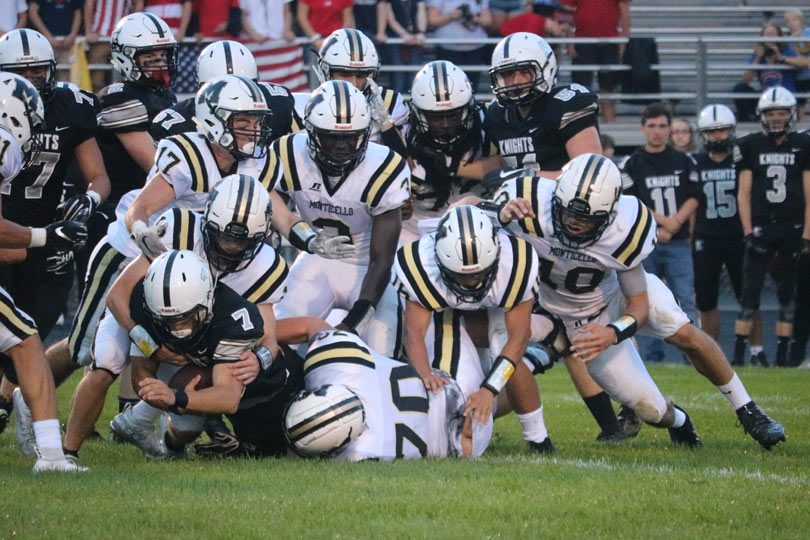 Monticello just couldn’t pull away from Turner Ashby Friday night and when you let a desperate, hungry squad like the Knights hang around, sometimes you get bitten.

“That’s huge especially with what we went through last week at Eastern View — that was humiliating and to our guys’ credit, they came back Monday morning and had a great week of practice,” said Turner Ashby coach Chris Fraser. “I’m just proud of the way we fought back.”

The Knights used a grinding run attack to notch a 32-25 overtime victory over the Mustangs, handing Monticello a road loss after they led for the majority of the second half. Grant Swineheart scored on first down in overtime from 10 yards and our and Monticello couldn’t answer. Turner Ashby picked off a pass in the endzone on fourth down after the Mustangs appeared to complete a pass for a touchdown on third but it was ruled out of bounds.

“We are very young and inexperienced and that showed tonight,” said Monticello coach Jeff Lloyd. “All week I told our team that this team is going to play desperate and they just made a couple more plays at the end that we didn’t.”

The way the game got to overtime was wild in and of itself. The Mustangs’ defense was stout throughout most of the second half, forcing the Knights to work for everything while making stops on fourth down. But on fourth and four late in the third quarter, Turner Ashby quarterback Tyler Quick got loose and raced down to the Monticello two despite a Herculean effort from Devonta Hargrove to run him down. Quick slipped in for a touchdown three plays later to tie the game at 19-19, capping a 14-play, 73-yard drive that was a part of a well-executed second half for a Turner Ashby team that wasn’t penalized all night.

Quick and Swinehart made several key plays for the Knights and combined for 269 yards on the ground with Swinehart rushing for 194 yards and three touchdowns.

“They both made huge plays all night, both offensively and defensively,” said Fraser, who coached at Charlottesville from 2008-2011.

Monticello responded immediately with a solid kick return by Trenton Johnson and a touchdown toss three plays later from from Malachi Fields to Johnson on a leaping catch from 36-yards out to take a 25-19 lead with 5:09 to play.

The Knights’ grinding style though had taken a toll on the Monticello defense and Swinehart broke contain and raced 71 yards for a score just two minutes after the Mustangs’ go-ahead touchdown.

Fields went to work though and hit Trevor Bratton for a big gainer on a swing pass and then converted two fourth and longs to put the Mustangs on the 21. Monticello ran the clock down to four seconds and Jack Culbreath came in to attempt a field goal on a soggy field that took a further soaking from sprinklers at halftime when they cut on during the band’s performance. Culbreath couldn’t get a clean kick, sending the game to overtime where Swinehart scored and Monticello couldn’t answer.

Despite the loss, there were a lot of positives for a young Monticello squad. Hargrove, a senior defensive end, disrupted the Turner Ashby attack all night and forced at least one of the three fumbles that put Turner Ashby in a hole in the final minutes of the first half.

“Right now he’s performing at an all-state level and he can run the football for us too,” Lloyd said.

Johnson made plays on defense, in the return game and with two key fourth quarter catches including the touchdown. Fields, a sophomore in just his second start, threw for two scores and 134 yards while rushing for 39 yards.

Monticello will try and bounce back Friday at home against Spotswood. 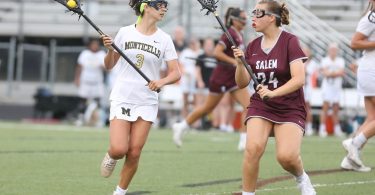