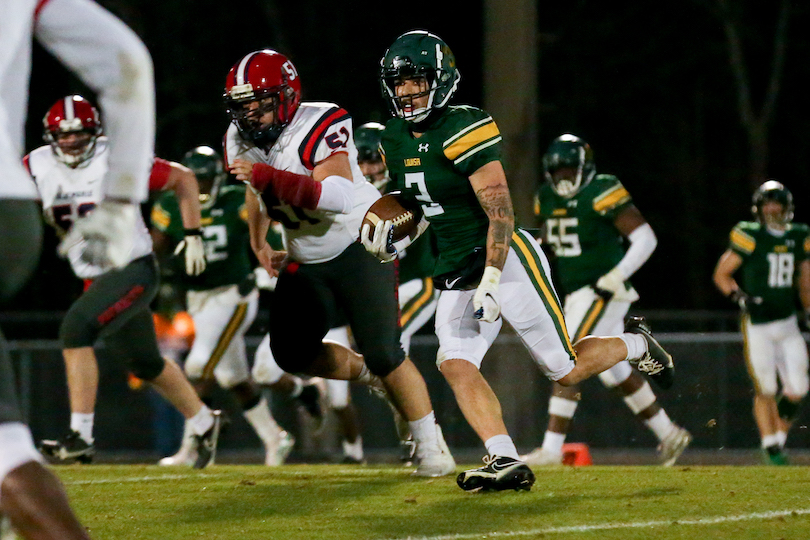 That’s how Louisa County coach Will Patrick started his post-game remarks, and any current, former, or future offensive coordinator in attendance at the Jungle on Friday night would have to agree.

The Lions turned the ball over three times, surrendered a safety, and accumulated only 244 yards of offense. However, visiting Albemarle had an even worse go, turning it over seven times, including a pick-six while managing fewer than 200 total yards.

“Our defense was flying around, man, six picks, seven takeaways,” said Patrick. “Now we’ve got to convert those, offensively, so that’s something we’ll hopefully fix for next week. Albemarle had a great game plan. They came in tonight and did some things different than we saw on tape, so hats off to them.”

In the end, Louisa claimed a fourth-straight Jefferson District championship, and Patrick and staff got plenty of film to dissect in next week’s Spring Break practices as the Lions enter the Region 4B playoffs where all four squads in the bracket had undefeated regular seasons.

“I hope people don’t lose sight of how hard it is to do, going undefeated, with everything that’s gone on this year,” said Patrick. “I’m so proud of these young men.”

Louisa got on the board first after gradually tilting field position in its favor in the first quarter. Junior defensive back Chase Miller came up with an interception on a deflected pass to set up the Lions at the Patriots’ 22; however, two plays later, Albemarle forced a fumble as Jordan Smith carried the ball inside the 5. After a three-and-out and a punt into a stiff wind, Louisa’s offense took the field at the Patriots’ 29. Smith took a handoff around the right edge and raced all the way to the pylon. Stephen Dean added the two-point run for an 8-0 lead.

The second quarter began with another pair of turnovers. An errant shotgun snap ended Albemarle’s next series near midfield; however, two plays later, Landon Wilson’s pass attempt got caught up in the wind and Eb McCarthy made the pick from his defensive back post. The Patriots then went three-and-out, and Louisa then focused on the ground game for its best drive of the night. The Lions covered 46 yards in nine plays, all of them rushes, capped by Wilson’s 7-yard keeper to grab a 15-0 lead with 2:08 left in the half.

Sophomore Jake King led a promising two-minute drive, including a 22-yard screen to Noah Grevious and a 27-yard completion to Nolan Pitsenberger to set up first-and-goal at the Lions’ 9. However, Miller made a diving play on a pass over the middle for a turnover at the 1 with 19 seconds left in the half.

“The play before that, I saw the dude I was guarding do a slant inside, so the next play I favored that and just so happened to be there at the perfect time,” Miller said.

Still, the Patriots got on the board before the break as the defensive front swarmed Smith in the backfield for a safety.

“Our defense continued to play great,” said Albemarle coach Brandon Isaiah. “If we could’ve gotten on the board before the half [with a touchdown], it would’ve been a one-possession game. We thought we had the things we wanted [on offense], but we just weren’t able to finish the deal a couple of times. You’ve got penalties, interceptions, things that just didn’t go our way, and those count against you a lot when you’re on the road playing against a good team.”

Albemarle received the third quarter kickoff and moved to midfield before the Louisa secondary struck again. Senior Logan McGhee intercepted King and gave the offense possession at the Patriots’ 44. Six plays later, Wilson connected with Miller for a 20-yard score.

“Coach Patrick had a great play call,” said Miller. “Their linebackers were blitzing so I went right over top of the linebackers, caught it, and went for the touchdown.”

Trailing 21-2, Albemarle gave freshman Amaje Parker some reps in the third quarter, but similar results ensued. The first series was foiled by two errant shotgun snaps that cost 30 yards. After a Louisa punt, the Patriots picked up a couple of first downs and reached the Lions’ 42 before Miller came up with his third pick of the night on a third-and-7 pass.

“We practice like we play,” said Miller. “Coming into the game, we saw that Albemarle passed more than they ran, pretty much, so we practiced the pass game.”

In the fourth, Louisa came up empty on a redzone drive as a 33-yard field goal attempt fell well short. The teams then traded interceptions. With the score still 21-2 with 7:18 remaining, King returned at quarterback for Albemarle but was sacked to end the next possession on downs. After a Louisa punt, the Patriots kept fighting, but on fourth-and-10 Armani Comfort slammed the door with a 37-yard pick-six with 3:00 left in the game. King did end on a positive note as he hit Will Townsend on a quick slant that went for a 45-yard touchdown with 1:13 remaining to round out the scoring.

For the Patriots, King and Parker combined for 171 yards through the air and completed 19-of-39 attempts.

Albemarle (3-3) wraps its season but can look forward to its young talent returning in the fall.

“The defense has been doing it all year,” Isaiah said. “We’ve got a really young group and a lot of these players will be back. Even a loss like tonight, with everything they had to endure, I believe those things can make you better and set the tone for your offseason.”

Smith led the Lions with 80 yards on 13 carries. Wilson kept it nine times for 49 yards, and Shelton added 37 on seven rushes. Wilson also completed 4-of-15 passes for 49 yards.

“We’ve got to fine tune [the offense] and get our running game going,” Patrick said. “Shelton’s a little nicked up, so is another running back. I thought Jordan [Smith] stepped up and played a heck of a game. It’s just that time of year. You’ve got to adjust and adapt and overcome.”

Louisa (6-0) will face King George (6-0) in a Region 4B semifinal. The VHSL will announce the time, date, and location on Sunday. 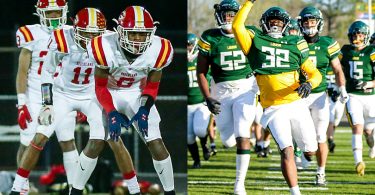