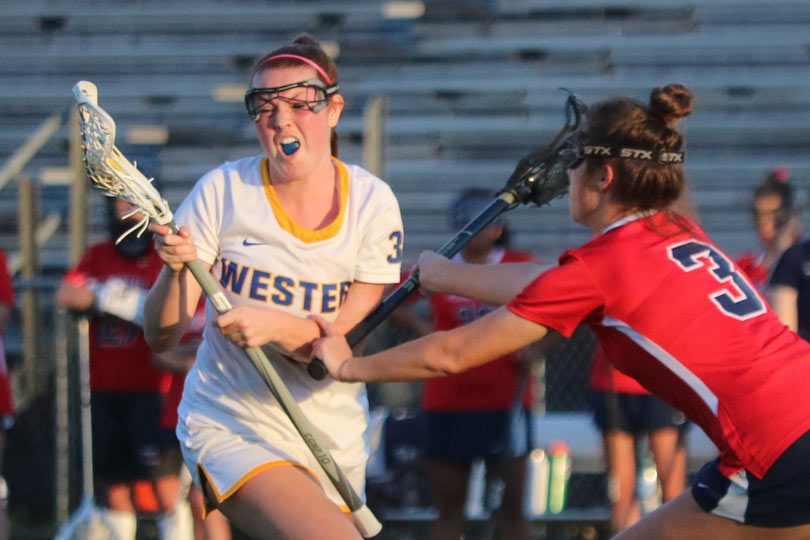 The goals just kept coming from both sides. Fastbreak after fastbreak, quick offensive set after quick offensive set, Western Albemarle and Albemarle engaged in a full-fledged shootout Tuesday night, with the Warriors pulling off a 19-14 win over the Patriots to complete the season sweep of the rivalry.

Until Western keeper Kathryn Thomas made a series of saves late that helped the Warriors shut the door on Albemarle, both teams had their way on offense. Western got massive performances from Mattie Shearer and Libby Carbo as the sophomore tandem finished and set the table all night.

“I think that fastbreak is finally working out for us, it has been a struggle in the past for us but it’s finally connecting and we’re getting those quick passes into a quick shot,” Carbo said.

Carbo finished with five goals and six assists on the night. Western had several perfectly executed offensive possessions — leading to assists on nine of their 19 goals — out of some quick plays that created open shots right on the doorstep and Carbo was either feeding or cashing in herself on the bulk of those.

“I definitely think teamwork was the main part — slowing it down when we knew we needed to, not rushing it, taking our time and making the smartest play,” Carbo said.

Shearer had six goals and an assist including one late where she lost the ball but scooped it up and split a pair of defenders before finishing. Shearer’s biggest impact came on the draw where she had 13 draw controls on the night. She more than doubled up Albemarle’s team total of six draw controls on her own. With freshman Mallory Green throwing in a hat trick and an assist and Reid Ferguson scoring twice, Western had more than enough offense to carry them to a win.

“One of our strengths is that if one person is hot or for instance most teams know Mattie is a really good attacker we have other people that can shine in other ways,” said Western coach Dana Boyle. “That’s helpful when you play good teams like Albemarle.”

Thomas finished with 11 saves in the cage for Western. Albemarle managed to cut the lead down to 14-12 late in the second half after trailing 11-7 at the break.

“When we were turning the ball over on attack they were converting on the other end and those couple of goal differences result in what looks like a big gap on the scoreboard when I’m not sure the game felt that way except for the beginning,” Albemarle coach Brittany McElheny. “We hurt ourselves because we forced turnovers but then created our own turnovers.”

Western only turned the ball over seven times while the Patriots coughed it up 11 times. Combined with Western’s Shearer-fueled advantage on the draw (20-6), Albemarle simply had less possessions to work with, fewer opportunities to make things happen. Then late, Western’s Thomas made a string of saves to prevent a miracle comeback despite Albemarle finding an entirely different gear.

Erica Repich also helped on the draw for the Warriors with five controls on the night. Sophie Lanahan, Anna Kreienbaum and Repich each scored once to round out the offense and Kreienbaum also had an assist.

Kelsey Myers, Leigh Young and Anna Murray each finished with four goals for the Patriots while Ella Dofflemyer had a goal and two assists.

Western gets a short break before squaring off with St. Anne’s-Belfield Wednesday at home at 6 p.m. while Albemarle travels to take on Monticello Tuesday.

Albemarle’s boys swimming rolled while the girls’ squad needed just about every point...