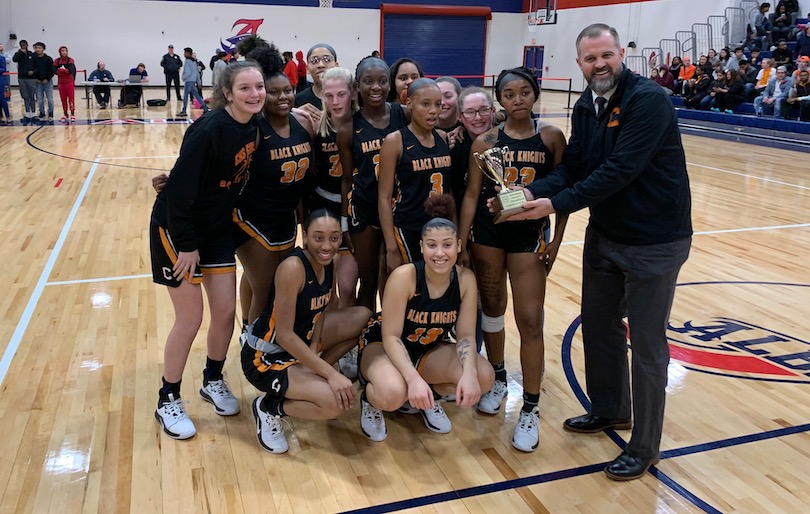 A fourth meeting between Charlottesville and Albemarle seemed all too fitting for the 2020 Jefferson District Championship, if not inevitable.

With the Patriots having beaten the Black Knights in the last two meetings, Charlottesville needed an answer to Albemarle’s post presence. It got one from Andrea Lefkowitz while on the other end of the floor, Camiyah Brown had a night that far exceeded her stat sheet.

With that duo leading the way in a game that was close in the first half but never quite in doubt in the second, Charlottesville’s depth on offense shone in a 52-36 victory to win a JD tourney title for the first time since 2015.

“Obviously these two teams are familiar with each other now,” said Black Knights coach Jim Daly. “I thought we got such great energy from so many players and it was such a great help for us. We used our bench to stay rested which we needed because it was an intense game, you fight for the boards, Albemarle flies around court and hustles too.”

It was a battle in the first half with Albemarle getting off to an 8-2 start but the Black Knights taking a 2-point lead into the second with Brown leading the attack. Behind MarQuelah Wilson, the Patriots fought back in the second to tie things at 18-18. Then a 10-5 finish to the half for Charlottesville paced by Lefkowitz inside, Brown driving, and the first of a trio of threes from Taylor Ward gave the Black Knights an inside edge at 28-23 heading into the break.

“I thought when we got a little breathing room our execution got really good,” Daly said. “In the half court we were patient, didn’t just go to one side, we attacked multiple sides and then finished.”

Ward came out in the second half and buried her second three to make it 31-23 and from there, Charlottesville simple maintained control of the game. The Black Knights got field goals from four different players in the third. Albemarle was able to make it 38-31 with 1:11 left in the third on a shot from Amanda Warlick but that was as close as the Patriots could get. With Ward knocking down another three to bookend the third, Charlottesville went into the fourth up 42-31. With a 46-31 lead with La’Kasia Calloway taking control on offense, the Black Knights soon went to work on the clock. Albemarle was able to get a handful of stops and a pair of turnovers but unable to find a spark offensively in the fourth.

“I wish we would have just taken care of the ball better and not made some passes you just can’t make against a team like that,” said Albemarle coach Rachel Proudfoot. “Defensively I thought some of our girls played really hard but it wasn’t a total unit and it has to be. I think we made shots difficult for them but didn’t communicate as well as we should have.”

With the Patriots struggling on offense, the Black Knights were able to maintain their double digit margin, avoid a free throw frenzy and simply dribble out the clock.

“Coach told us finishing the game was about taking only layups and wide open jumpshots, not forcing anything and making sure we met every pass so that Albemarle couldn’t get any tips,” Brown said.

Daly was effusive in praise of Brown for controlling the point all game and limiting the window for Albemarle’s defense to spark a run.

“She was incredible,” Daly said. “Having the ball in her hand the whole night — I don’t know what the assist to turnover ratio was but I just felt like play after play she was just doing the things we needed to win the ball game.”

For Charlottesville, Lefkowitz led the way offensively with 14 points and also on the glass with 16 rebounds. Brown finished with 13 points while Ward finished with nine to provide solid offensive depth.

“This was a huge win for us,” Lefkowitz said. “We wanted to go into the region tournament with a win because it would be such a boost for confidence.”

Only five players scored for Albemarle but four of them each had eight points. Wilson, Warlick, Jamie Rademacher and Sylvie Jackson all finished that total.

“Our Region is tough as all get out so it’s simple,” Proudfoot said. “We have to take care of the ball and the overall team defense has to be a lot better. But we also need to get our regular scorers back up to the confidence level we’ve had most of the season. From there, we’re just going to see how it all plays out.”

It seemed inevitable as the region standings started to shake out down the stretch that two...