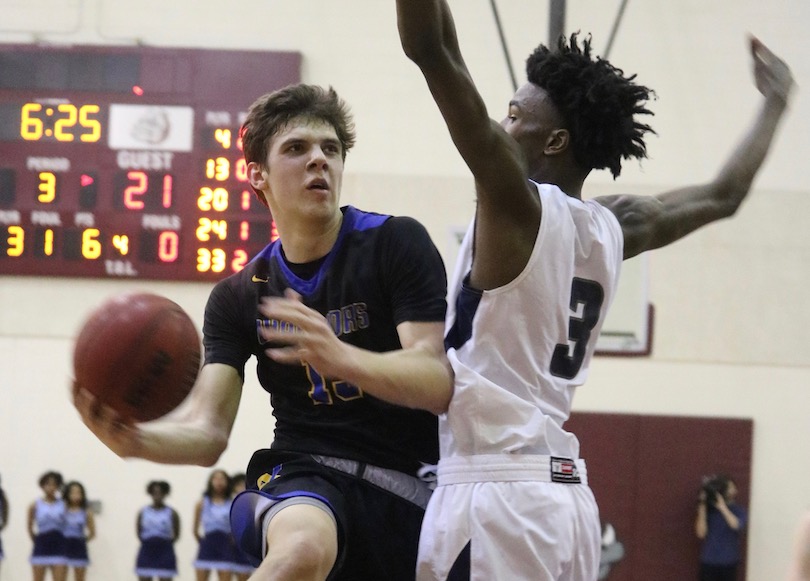 Tommy Mangrum and his Western Albemarle boys basketball teammates knew what they were walking into Tuesday. Their reward for winning the Region 3C title during a string of three-straight buzzer beaters was a three-hour drive and a hostile environment in foe Lakeland High’s backyard with a berth in the state title game on the line.

With those odds stacked against them, the Warriors made Lakeland sweat it out until nearly the very end as the Cavaliers held off Western for a 43-35 victory that ends the Warriors’ campaign.

“It was tough for sure and it was all about heart,” Mangrum said. “It didn’t turn out how we wanted it, but there’s nothing to hang our heads about.”

The Warriors actually imposed their style and pace on the game, giving themselves a chance down the stretch in a game that features two of the state’s better defensive teams. In fact, the game had a similar feel to some of the other all-out battles Western has had during its string of game-winning, buzzer-beating buckets.

“I thought we were maybe on pace to do that again here at some point,” said Western coach Darren Maynard. “But we didn’t quite get it done tonight.”

With just 2:43 left, Western was down just 35-34. But shots stopped falling in the closing couple of minutes. Then Lakeland’s Keimari Artis found Raymond Belly on a backdoor cut for a lob and finished to put Lakeland up by four at 39-34. Once the Warriors started fouling intentionally, the Cavaliers knocked down enough free throws to keep Western at bay.

“I couldn’t be prouder of my guys,” Mangrum said. “We came in here to a hostile environment, lots of fans, they had the band and it was loud and everything. We put it all on the floor tonight.”

Lakeland got a huge first half boost from Clint Wright, Jr. who scored 12 points before the break as part of a team-high 16 points. Bellamy did the heavy lifting in the second half, finishing with 14 points including an early fourth quarter dunk where he simply dove down the middle of the lane and went straight to the rack.

Artis rounded out the bulk of Lakeland’s scoring with eight points as Lakeland’s guards made things tough on the Warriors all night.

Andrew Shifflett scratched out a team-high 10 points on the night for Western while Henry Sullivan had eight. Mangrum had seven and Josh Sime managed six points. The Warriors’ best stretch really came off the opening tip-off where back-to-back Riley Prichard and Mangrum threes put Western up 6-1. Lakeland quickly clawed away at that lead and by halftime the game was a 21-21 deadlock.

Western did have a strong contingent of fans themselves thanks to a fan bus that brought a student section to Suffolk, but it was far from the neutral site feel of past state semifinal and tournament games when they were hosted either at supersites or at VCU’s Siegel Center. Instead, the Warriors were left with what was for all intents and purposes, a Lakeland home game. Louisa had to overcome a similar challenge last year, facing Lake Taylor 23 minutes from their campus at Churchland to advance to the state title game.

“It was a really hostile environment and we didn’t really deserve to come down here three hours to play a final four game in somebody else’s backyard, I don’t even understand that,” Maynard said. “I’m really proud of my guys. I thought we played really great defense the whole game really.”

The loss ends Mangrum, Prichard and Angelo Garono’s careers. Mangrum finishes as the Region 3C player of the year and the Warriors’ No. 2 all-time leading scorer behind current Swarthmore guard Ryan Ingram.

“They’re going to be hard to replace,” Maynard said. “We’re super young and the future is really bright if the young guys will work as hard as the seniors that are leaving, we’ll be pretty good again.”