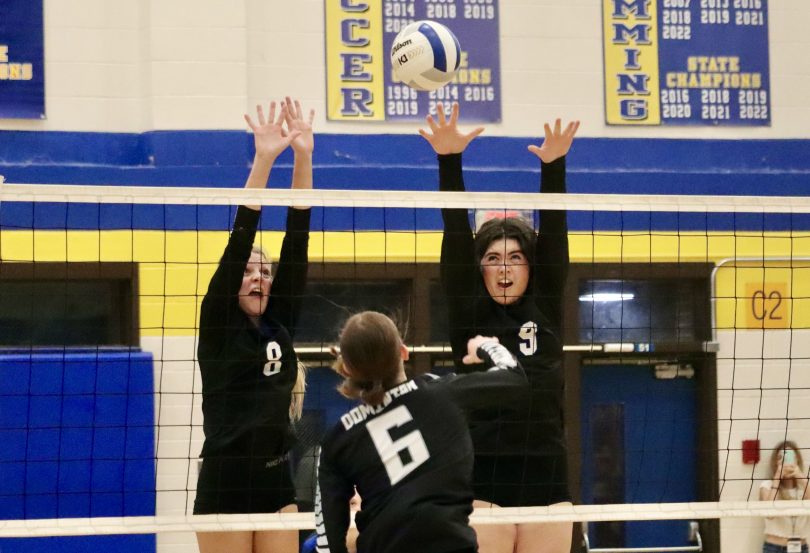 Western Albemarle’s volleyball team wanted to make sure that it left everything on the court Saturday afternoon against Dominion in the VHSL Class 4 State Quarterfinals.

The Warriors did exactly that, fighting off charge after charge by the Titans before eventually falling in game five 3-2.

“That was how we wanted that match to go, if we were going to grind it out against a team the caliber of Dominion we wanted it to go five,” said Western Albemarle coach Jule Radlinksi. “A couple of things didn’t go our way at the end but the entirety of the match we fought hard, we changed things when we needed to and I’m just incredibly proud.”

The Warriors were hosting a state quarterfinal for the first time in program history after notching an historic program-first region championship earlier this week. That meant a matchup with another tough, talented and seasoned squad from Northern Virginia in the Titans and both squads threw everything they could at one another.

Dominion rolled in game one 25-17 before Western bounced back and won game two 25-19. The Titans appeared to seize control in game four but then Western answered the bell, winning 25-18 to set the stage for a winner-take-all game five.

That game became a microcosm for the entire match. First Dominion jumped out to a 5-1 lead to force a Western timeout. Then Natalie Rocco closed the gap to 7-5 with one of her 13 kills on the night and Western kept charging and trailed just 8-7 when Dominion called a timeout of their own.

“We just told them don’t let adrenaline get away from you, in these types of matches, the stage feels a little bit bigger,” said Dominion coach Phuong Tat. “So as long as we could control our adrenaline level and play the way we play we were going to be okay regardless.”

Dominion went on a short run and overcame one of Sophia Beard’s 14 kills – half of which came when she attacked down the line — to take a 12-8 lead with Dominion’s Emma Adiaconitei registering an ace and prompting Western’s second timeout.

Western got another Beard kill and then a net touch by Dominion closed the gap to 14-11, prompting another Dominion timeout. Out of that one came the final, decisive blow, a kill by Dominion middle blocker Maya Van Wyngaardt.

Sofia Beard and Natalie Rocco made life particularly hard on the Titans and combined with Kinsley Campbell’s nine kills on the night for a formidable offensive attack. Dominion countered with Van Wyngaardt, a 6-foot-1 middle.

“She’s one of our seniors and that’s what she does for us and we knew we needed her to matchup against their (Rocco) and (Beard),” Tat said. “I thought those two girls played absolutely lights out.”

The Warriors also got big nights from Sequoyah Sorenson who had 28 assists and 12 digs, Caroline Centofante who had two blocks and Rocco at the service line where she had four aces. Sorenson and Beard also had two aces each and Beard notched eight digs while Amelia Tomlinson had 10 digs.

Beard was a force all night, all over the floor.

“She very much put the team on her back, they did not have an answer for her,” Radlinski said. “Going out like that as a senior, the tears will be there tonight but she should be incredibly proud of her performance.”

While the match puts a wrap on impressive prep careers for Beard, Campbell, Sorenson and Ella Rehberg, Western is heavy on juniors who have been building each season and Saturday’s experience could be another stepping stone toward an even loftier goal of a potential state title.

“Each year we’re getting to that next step,” Radlinski said. “Being a junior heavy team they’re hopefully going to get these opportunities next year and just being able to see this stage is really important for us.”

At many schools across the country that are outside of the sport’s hotbeds like Pennsylvania, Ohio...